The illustration of Old West ghost towns is something that every American can relate to. During the great gold rush of the mid 1800s in California, Nevada, and Wyoming, towns sprung up out of nowhere to support the gold mining efforts of those looking to strike it rich. General stores, bars, hotels, brothels, and jails appeared out of nowhere, based on demand from delusional prospectors hoping to hit the jackpot.  In a similar way thousands of malls emerged throughout suburban America in the last twenty years as delusional shoppers thought they could spend their way to prosperity and achievement. Both delusions will end in the same manner.

When the gold rush ended as quickly as it started, the artificial demand collapsed and the towns were abandoned. These ghost towns sat vacant for decades, slowly decaying and rotting away. As you drive around today, you notice more and more For Lease signs on vacant retail buildings. Strip malls, inhabited by mom and pop stores, karate studios, pizza joints, and video stores have felt the initial onslaught of consumer deleveraging. As the pace of retailer collapse accelerates in 2009, larger malls will begin to go dark. Once-bustling centers of conspicuous consumption and material decadence, built upon a foundation of consumer debt, will become ghost malls. Decaying, rotting malls inhabited by rats, wild dogs, and homeless former retail employees, will be a blight on the suburban landscape for decades.

For the last twenty years, the American consumers have carried the burden of the world on their broad shoulders. This has been a heavy yoke, but when you take steroids it doesn’t seem so heavy. The steroid of choice for American consumers was debt. They have utilized home equity loans, cash out refinancing, credit card debt, and auto loans to live far above their means. It has been a wild ride, but the journey is over. They can’t score steroids from their dealers (banks) anymore. The pseudo-wealth created in the last twenty years has begun to unwind, and it will increase in speed in 2009.

Average Americans, who saw their faux paper wealth growing rapidly as their home values increased, took advantage of this by refinancing their mortgages and extracting the equity from their homes and spending it. They mined $3 trillion of equity out of their houses. This spending of seed corn led to the vast majority of GDP growth between 2000 and 2007. 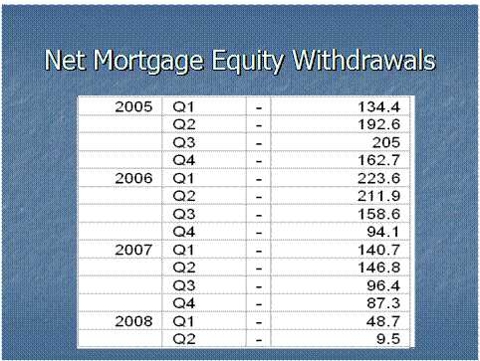 Major banks offered credit cards using  home equity as a way to pay your everyday expenses like groceries, cigarettes, beer, gas and clothes. Eating your house was never so easy. The enormous amount of excess home sales and equity extraction led to titanic demand for home furnishings, remodeling services, appliances, electronic gadgets, BMWs, and exotic vacations. This led to immense expansion plans by retail and restaurant chains, based on extrapolation of this false demand.

A permanent psychological change has occurred in American consumers. They have lost $30 trillion in value from their homes and investments in the last few years. No amount of fiscal stimulation will reverse this psychological trauma. The savings rate will increase from 0% to at least 8%. Mike Shedlock recently described the state of affairs:

Now the impact of a retrenching consumer will be felt far and wide, from Des Moines to Shanghai. Consumer spending has accounted for 72% of GDP. It will revert to at least the long term mean of 65%. David Rosenberg, the brilliant economist from Merrill Lynch, describes will happen:

This is an epic event; we're talking about the end of a 20-year secular credit expansion that went absolutely parabolic from 2001-2007. Before the US economy can truly begin to expand again, the savings rate must rise to pre-bubble levels of 8%, that the US housing stocks must fall to below eight months' supply, and that the household interest coverage ratio must fall from 14% to 10.5%. It's important to note what sort of surgery that is going to require. We will probably have to eliminate $2 trillion of household debt to get there, this will happen either through debt being written off, as major financial institutions continue to do, or for consumers themselves to shrink their own balance sheets. 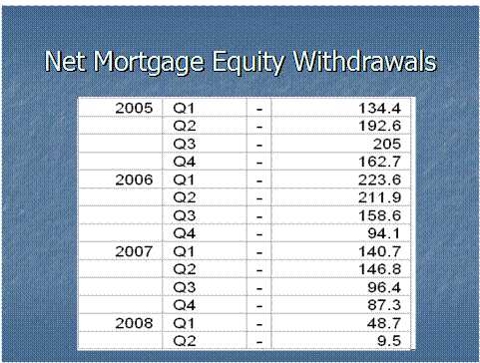 Every major retailer in the United States has built its expansion plans on an assumption that American consumers would continue to spend at an unsustainable rate. One basic truth that never changes is that an unsustainable trend will not be sustained. That crucial assumption error will lead to the bankruptcy of any retailer that financed its expansion with excessive debt. Warren Buffett’s wisdom will be borne out:

Only when the tide goes out do you discover who’s been swimming naked.

There are at least 1.1 million retail stores in the United States according to the Census Bureau. There are approximately 1,100 malls in the United States, not counting thousands of strip centers. These numbers will be considerably lower by 2011. ICSC chief economist Michael Niemira explained, "In the midst of all this doom and gloom, it's hard to imagine it getting better... But keep in mind, what happens in strong downturns is there's a hefty pent-up demand. It's wrong to extrapolate these conditions for the next year or two." Mr. Niemira will be wrong this time. 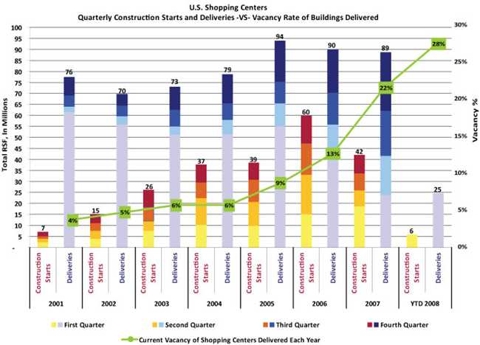 James Quinn is a senior director of strategic planning for a major university. James has held financial positions with a retailer, homebuilder and university in his 22-year career. Those positions included treasurer, controller, and head of (more...)
Related Topic(s): Bankruptcy; Banks; Credit; Finance; Gold; Gold; Housing; Housing; Sales; Shopping; (more...) Starbucks, Add Tags  (less...)
Add to My Group(s)
Go To Commenting
The views expressed herein are the sole responsibility of the author and do not necessarily reflect those of this website or its editors.