Does it seem like many supporters of Donald Trump are out of touch with reality? Why are they so dismissive of claims that Russia attacked our election? Even in the face of truly damning information about how the Donald Trump Jr. colluded with Russian's to get dirt on Hillary Clinton, the far right and their Representatives in Congress seem unmoved. Why? 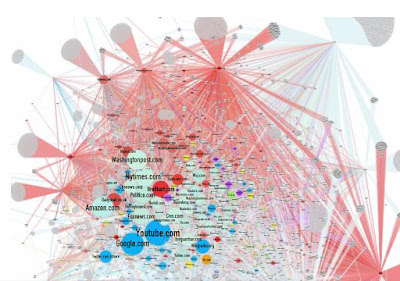 Map of cyber activity by Right-wing websites during the 2016 election to counter mainstream media advantage.

I set out to answer that question. Recognizing that computer algorithms currently use by social media keep me from viewing the conversations of those who don't share my views, I began reading conservative websites such as Breitbart and Info Wars for clues. I forced myself to listened to broadcasts of the Alex Jones Radio Show on Info Wars. For those who don't know him, Alex Jones is a popular right-wing talk show host. He has millions of listeners and claims those numbers are growing as Fox News numbers decline. He admonished Fox News for having lost its conservative edge. He is also the manager or owner of a number of conservative media outlets.

You probably are familiar with Breitbart. It was initially financed by recluse billionaire, Robert Mercer. Steve Bannon was the man in charge there until after this past last election.

As I browsed through these websites, one particular radio show caught my attention. I listened in detail (took notes) to a radio broadcast of Alex Jones on July 12, 2017. Using this as a starting point, after sampling other content on both Breitbart and Info Wars, some patterns emerged that I want to share.

First, the verbiage of Alex Jones' show can't be easily unpacked. It is dense with disinformation, oblique references, inflammatory innuendos and repetitive conservative and nativist memes. The overall narrative establishes and affirms an alternative frame of reference for his conservative listeners. The broadcasts contain a blitz of buzz words and references to long debunked Obama era scandals, as I would characterize them, woven into a story line that alters the context of current events. The content is clearly intended to evoke strong emotions in the listener.

But the biggest insight was that these conservative sites ring exactly the same alarm bells about democracy under attack and a pending authoritarian takeover that those on the left worry about. Info Wars also points to the same means and methods used to attack America as do the rest of us, such as disinformation programs and internet propaganda. But these conservative websites substitute Islamic jihadists for Russian oligarchs, and they substitute "Marxist" liberals for right-wing nationalists.

In effect this counter narrative creates two American world views that are mirror images. It unites us in our worst fears for American democracy while irreconcilably dividing us politically. We agree that we are at war conducted through information warfare, but we see different enemies waging that war against us and different ideas on what those foreign enemies want to accomplish. We can't come to any mutual understanding of our common fears as long as we have an entirely different framework and different sets of facts.

For factual confirmation of the conservative world view listeners are referred to other conservative websites, such as understandingthethreat.com. Here is what that site says about its founder:

John Guandolo is the Founder of UnderstandingtheThreat.com, an organization dedicated to providing strategic and operational threat-focused consultation, education, and training for federal, state and local leadership and agencies, and designing strategies at all levels of the community to defeat the enemy.

That enemy is radical Islam. Guandolo's website promotes the view that the real threats to America originates from Middle East terrorist organizations. The site has been active since June of 2012 and appears to be hosted in Montreal, Canada, according to domain registration data.

On the other side, Rachael Maddow had Michael Carpenter on her show recently. He was a U.S. Deputy Assistant Director of Defense before retirement. His take on our strategic threats places Russia at the center of the attacks on our democracy. From what he saw in the past, the cyber operations during the last election are consistent with what Russia has employed in places like the Ukraine. Typically, Russia seeks proxies and allies in the foreign countries they attack to help carry out the cyber operations. They try to penetrate the networks of insurgent political groups seeking power within their county. They do this, and help support those groups, to have influence as those groups gain power. Carpenter has no doubt that this has included infiltrating far right-wing groups in America and, by extension, the GOP.

For Alex Jones, his constellation of media outlets continue to create and maintaining this alternative world view focused on terrorists as the existential to America democracy. Those who believe this are convinced the investigations of the Trump Administration are witch hunts and that the allegations of Russian interference are smokescreens by the "deep state" to conceal a leftist Islamist takeover of America. They point to their universe of alternate facts, theories and political conspiracies to prove there is an unholy alliance between the liberal elites and Islamist jihadists seeking to impose Sharia Law on America. They deny the DNC was hacked by Russia, claiming there is no evidence. They see the accusation itself is proof of "deep state" preparations for a coup against Donald Trump. Even more moderate Republicans are held in suspicion. One guest on Alex Jones' show said, "The GOP establishment hates Trump more than MSNBC." In other words, the Republican establishment is also complicit with the liberal elites in working with Hamas and other Islamic groups to bring about an authoritarian state and Sharia Law in America. The CIA, NSA and FBI are all in on it and can't be trusted.

The Goal of Islamic radicals, according to Alex Jones, is to create chaos in America; to destabilize us so that out of the chaos jihadists can bring about revolution, an authoritarian state and implementation of Sharia Law. Rodger Stone, a guest on his show, said, The elite have to assume there will be no elections in the future, but a global takeover. An authoritarian state in America."

Alex Jones defines Sharia Law as total warfare against our culture, social institutions, political systems, military systems, our media and our American way of life. According to Jones, these jihadists are experts in political influence operations. Note that this is just what our Intelligence community is saying about Russia.

These are the alt-right media voices that conservative GOP members in the House and Senate are hearing on their radio. These are the sentiments reflected in their core constituents, their power base. Is it any wonder they hardly react to the US Intelligence community's warning about Russia? The men and women of the GOP are just as patriotic as any of us, but they are straddling two very different world views. They have to know that both worlds can't be true. Either the Russians are undermining our democracy in league with ultra conservative oligarchs to divided America, or it is the Islamic extremists doing the same thing in league with liberal Democrats and the deep state (i.e., our Intelligence community).

Related Topic(s): Alex Jones; Countering Foreign Disinformation And Propaganda A; Disinformation; Online Jihadist Movement; Russia Investigation; Russian Hacking, Add Tags
Add to My Group(s)
Go To Commenting
The views expressed herein are the sole responsibility of the author and do not necessarily reflect those of this website or its editors.