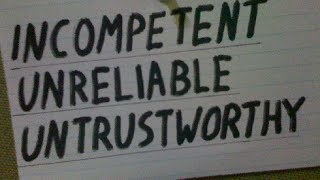 Not having the necessary skills to do something successfully.
(Image by YouTube, Channel: MsMilkytheclown1)   Details   DMCA

Washington's foreign policy is incompetent. Washington has alienated the world with its insane illegal attacks on other countries. Today the United States and Israel are the two most distrusted countries on earth and the two countries regarded as the greatest threat to peace.

The military/security complex is incompetent. The national security state is so incompetent that it was unable to block the most humiliating attack in history against a superpower that proved to be entirely helpless as a few people armed with box cutters and an inability to fly an airplane destroyed the World Trade Center and part of the Pentagon itself. The military industries have produced at gigantic cost the F-35 that is no match for the Russian fighters or even for the F-15s and F-16s it is supposed to replace.

The media is incompetent. I can't think of an accurate story that has been reported in the 21st century. There must be one, but it doesn't come to mind.

The public schools have been made incompetent by standardized national testing. The purpose of education today is to pass some test. School accreditation and teachers' pay depend not on developing the creativity or independent thinking of those students capable of it, but on herding them through memory work for a standardized test.

One could go on endlessly.

Instead, I will relate a story of everyday incompetencies that have prevented me from writing this week and for a few more days yet.

Recently, while away from my home, a heavy equipment operator working on a nearby construction site managed to drive under power lines with the fork lift raised. Instead of breaking the wire, it snapped the pole in half that conveyed electric power to my house. The power company came out, or, as I suspect, an outsourced contractor, who reestablished power to my home but did not check that the neutral wire was still attached. Consequently for a week or so my house experienced round-the-clock surges of high voltage that blew out the surge protection, breaker box, and every appliance in the house. Expecting my return, the house was inspected, and the discovery was that there was no power. Back came the power company and discovered that high voltage was feeding into the house and had destroyed everything plugged in.

So every appliance is fried. Glass everywhere from blown out light bulbs. We are talking thousands of dollars.

This is America today. And the incompetents ruling incompetents want war with Iran, Korea, Russia, China. Considering the extraordinary level of incompetence throughout the United States, I guarantee you that we will not win these wars.

Related Topic(s): America; Incompetence; Police; Universities; Wars, Add Tags
Add to My Group(s)
Go To Commenting
The views expressed herein are the sole responsibility of the author and do not necessarily reflect those of this website or its editors.