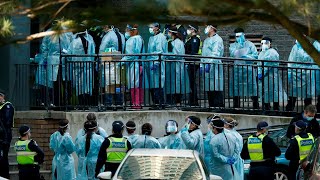 Alan Jones Sky News host Alan Jones says with militant protests on the streets, freedom of speech being destroyed, and a virus .ripping the guts out of the economy,. ...
(Image by screen shot)   Details   DMCA

On August 2, lockdown measures were implemented in Melbourne, Australia, that were so draconian that Australian news commentator Alan Jones said on Sky News: "People are entitled to think there is an 'agenda to destroy western society.'" [See the video below].

The gist of an August 13th article on the Melbourne lockdown is captured in the title: "Australian Police Go FULL NAZI, Smashing in Windows of Civilian Cars Just Because Passengers Wouldn't Give Details About Where They Were Going."

Another article with an arresting title was by Guy Burchell in the August 7th Australian National Review: "Melbourne Cops May Now Enter Homes Without a Warrant, After 11 People Die of COVID Australia, This Is Madness, Not Democracy." Burchell wrote that only 147 people had lost their lives to coronavirus in Victoria (the Australian state of which Melbourne is the capital), a very low death rate compared to other countries. The ramped up lockdown measures were triggered by an uptick in cases due to ramped up testing and 11 additional deaths, all of them in nursing homes (where lockdown measures would actually have little effect). The new rules include a six week curfew from 8 PM to 5 AM, with residents allowed to leave home outside those curfew hours only to shop for food and essential items (one household member only), and for caregiving, work and exercise (limited to one hour).

"But the piece de resistance," writes Burchell, "has to be that now police officers can enter homes with neither a warrant nor permission. This is an astonishing violation of civil liberties". Deaths of this kind are not normally cause for government action, let alone the effective house arrest of an entire city." He quoted Victoria Premier Daniel Andrews, who told Victorians, "there is literally no reason for you to leave your home and if you were to leave your home and not be found there, you will have a very difficult time convincing Victoria police that you have a lawful reason." Burchell commented:

[U]nder this new regime you can't even remain in your house unmolested by the cops, they can just pop 'round anytime to make sure you haven't had Bruce and Sheila from next door round for a couple of drinks. All over a disease that is simply not that fatal".

Last year more than 310,000 Australians were hospitalised with flu and over 900 died. By all metrics that makes flu a worse threat than COVID-19 but police weren't granted Stasi-like powers during the flu season. Millions of people weren't confined to their homes and threatened with AUS$5,000 fines for not having a good reason for being out of their homes.

At an August 19th press conference, Australia's second most senior medical officer said the government would be discussing measures such as banning restaurants, international travel, public transport, and withholding government programs through "No Jab No Pay" in order to coerce vaccine resisters.

An August 13 article on LifeSiteNews quoted Father Glen Tattersall, a Catholic parish priest in Melbourne, who said the draconian provisions "simply cannot be justified on a scientific basis":

We have a curfew from 8 pm to 5 am, rigorously enforced including by the use of police helicopters and search lights. Is the virus a vampire that just comes out at night? Or the wearing of masks: they must be worn everywhere outside, even in a park where you are nowhere near any other person. Why? Does the virus leap hundreds of metres through the air? This is all about inducing mass fear, and humiliating the populace by demanding external compliance.

Why the strict curfew? Curfews have been implemented recently in the US to deter violence during protests, but no violence of that sort was reported in Melbourne. What was reported, at least on social media, were planes landing in the night from "the Chinese province of Guandong carrying equipment related to 5G and the Chinese biometric social credit system, which was reportedly being installed under a blanket of secrecy.

Angelo Codevilla, professor emeritus at Boston University, concluded in an August 13th article, "We are living through a coup d'e'tat based on the oldest of ploys: declaring emergencies, suspending law and rights, and issuing arbitrary rules of behavior to excuse taking 'full powers'."