Melbourne has gone to extremes with its lockdown measures, but it could portend things to come globally. Lockdowns were originally sold to the public as being necessary just for a couple of weeks to "flatten the curve," to prevent hospital overcrowding from COVID-19 cases. It has now been over five months, with self-appointed vaccine czar Bill Gates intoning that we will not be able to return to "normal" until the entire global population of 7 billion people has been vaccinated. He has since backed off on the numbers, but commentators everywhere are reiterating that lockdowns are the "new normal," which could last for years.

All this is such a radical curtailment of our civil liberties that we need to look closely at the evidence justifying it; and when we do, that evidence is weak. The isolation policies were triggered by estimates from the Imperial College London of 510,000 UK deaths and 2.2 million US deaths, more than 10 times the actual death rate from COVID-19. A Stanford University antibody study estimated that the fatality rate if infected was only about 0.1 to 0.2 percent; and in an August 4th blog post, Bill Gates himself acknowledged that the death rate was only 0.14 percent, not much higher than for the flu. But restrictive measures have gotten more onerous rather than less as the mortality figures have been revised downward.

A July 2020 UK study from Loughborough and Sheffield Universities found that government policy over the lockdown period has actually increased mortality rather than reducing it, after factoring in collateral damage including deaths from cancers and other serious diseases that are being left untreated, a dramatic increase in suicides and drug overdose, and poverty and malnourishment due to unemployment. Globally, according to UNICEF, 1.2 million child deaths are expected as a direct result of the lockdowns. A data analyst in South Africa asserts that the consequences of the country's lockdown will lead to 29 times more deaths than from the coronavirus itself.

Countries and states that did very little to restrict their populations, including Sweden and South Dakota, have fared as well as or better overall than locked down US states. In an August 12th article in The UK Telegraph titled "Sweden's Success Shows the True Cost of Our Arrogant, Failed Establishment," Allister Heath writes:

Sweden got it largely right, and the British establishment catastrophically wrong. Anders Tegnell, Stockholm's epidemiologist-"king, has pulled off a remarkable triple whammy: far fewer deaths per capita than Britain, a maintenance of basic freedoms and opportunities, including schooling, and, most strikingly, a recession less than half as severe as our own.

Not restraining the populace has allowed Sweden's curve to taper off naturally through "herd immunity," with daily deaths down to single digits for the last month. (See chart.)

The Pandemic That Wasn't?

Also bringing the official narrative into question is the unreliability of the tests on which the lockdowns have been based. In a Wired interview, even Bill Gates acknowledged that most US test results are "garbage." The Polymerase Chain Reaction (PCR) technology used in the nasal swab test is considered the "gold standard" for COVID-19 detection; yet the PCR test was regarded by its own inventor, Nobel prize winner Kary Mullis, as inappropriate to detect viral infection. In a detailed June 27th analysis titled "COVID-19 PCR Tests Are Scientifically Meaningless," Torsten Engelbrecht and Konstantin Demeter conclude:

Without doubt eventual excess mortality rates are caused by the therapy and by the lockdown measures, while the "COVID-19" death statistics comprise also patients who died of a variety of diseases, redefined as COVID-19 only because of a "positive" test result whose value could not be more doubtful.

The authors discussed a January 2007 New York Times article titled "Faith in Quick Test Leads to Epidemic That Wasn't," describing an apparent whooping cough epidemic in a New Hampshire hospital. The epidemic was verified by preliminary PCR tests given to nearly 1,000 healthcare workers, who were subsequently furloughed. Eight months later, the "epidemic" was found to be a false alarm. Not a single case of whooping cough was confirmed by the "gold standard" test - growing pertussis bacteria in the laboratory. All of the cases found through the PCR test were false positives.

Yet "test, test, test" was the message proclaimed for all countries by WHO Director General Tedros Adhanom at a media briefing on March 16, 2020, five days after WHO officially declared COVID-19; and the test recommended as the gold standard was the PCR. Why, when it had already been demonstrated to be unreliable, creating false positives that gave the appearance of an epidemic when there was none? Or was that the goal - to create the appearance of a pandemic, one so vast that the global economy had to be brought to a standstill until a vaccine could be found? Recall Prof. Codevilla's conclusion: "We are living through a coup d'e'tat based on the oldest of ploys: declaring emergencies, suspending law and rights, and issuing arbitrary rules of behavior to excuse taking 'full powers'."

People desperate to get back to work will not only submit to a largely untested vaccine but will agree to surveillance measures that would have been considered a flagrant violation of their civil rights if those rights had not been overridden by a "national emergency" justifying preemption by the police powers of the state. They will agree to get "immunity passports" in order to travel and participate in group activities, and they will submit to quarantines, curfews, contact tracings, social credit scores and informing on the neighbors. The emergency must be kept going to justify these unprecedented violations of their liberties, in which decision-making is removed from elected representatives and handed to unelected bureaucrats and technocrats.

A national health crisis also a necessary prerequisite for relief from liability for personal injuries from the drugs and other products deployed in response to the crisis. Under the 2005 Public Readiness and Emergency Preparedness Act (PREPA), in the event of a declared public health emergency, manufacturers are shielded from tort liability for injuries both from the vaccines and from invalid or invasive tests. Compensation for personal injuries is a massive expense for drug companies, and the potential profits from a product free of that downside are a gold mine for pharmaceutical companies and investors. The liabilities will be borne by the taxpayers and the victims.

All this, however, presupposes both an existing public health emergency and no effective treatment to defuse it. That helps explain the otherwise inexplicable war on hydroxychloroquine, a safe drug that has been in use and available over the counter for 65 years and has been shown to be effective in multiple studies when used early in combination with zinc and an antibiotic. A table prepared by the American Association of Physicians and Surgeons (below) found that the US has nearly 30 times as many deaths per capita as countries making early and prophylactic use of hydroxychloroquine. 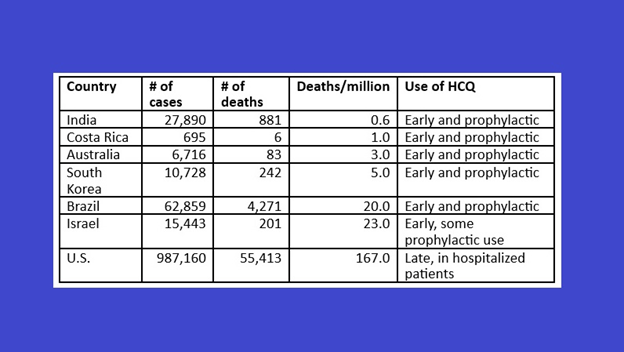