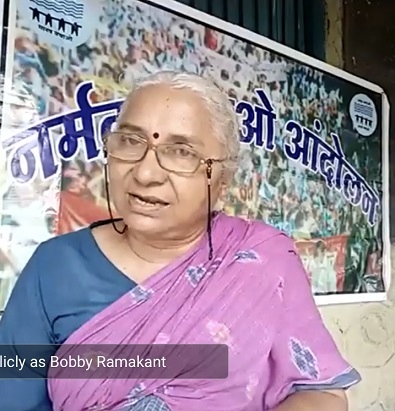 Senior activist Medha Patkar launched a youth led, Towards A Better World campaign, in an online session where several youth leaders of Fridays For Future (a global movement led by Greta Thunberg) and other youth activists took part. We must change our life, lifestyle and sources of livelihood for a sustainable and just development, said Medha Patkar. "People should commit to at least one thing they will do to make this world a better place" appealed Dr Sandeep Pandey, Magsaysay Awardee and Vice President of Socialist Party (India). Dr Pandey is also a key inspiration that has motivated the young people to step forward and launch this campaign.

This newly launched campaign is aimed to encourage everyone to take individual actions to "Be The Change" and make this world a better place. "If you want to make a positive impact on the world and make the world a better place, we urge you to take positive steps that you find worthwhile. Kindly consider committing to Be The Change that you want to incorporate in yourself or have already incorporated. This will help to concretize your personal journey and inspire similar changes in others" said Abhay Jain, who is a graduate of Indian Institute of Technology, Banaras Hindu University, Varanasi, India and aspiring fair-trade entrepreneur.

Founder-editor of The Public and noted socialist, Anand Vardhan Singh, said that although COVID-19 pandemic is perceived as a threat, but environment is not. Environment crisis has been brewing since long - but even then climate emergency is not getting the due attention it warrants to save our planet. He shared a quote from Mahatma Gandhi: "Nature works unceasingly according to her own laws, but man violates them constantly."

Ariadne Papatheodorou, 16 years old climate activist from Fridays For Future movement in Greece said "We as teenagers have to act because global leaders are ignoring the call for urgency over and over again - and because we want to have a future which includes gender equality, human rights and climate change." She also raised the concern for immigrants and refugees.

Ayesha Imtiaz, a 16 years old climate activist from Fridays for Future in Pakistan shared how the plight of indigenous peoples impacted by pollution had motivated her to step forward and act upon climate crisis. "Pollution also contributes to climate change and spread of diseases. We all need to unite - rather than thinking as a country we need to think as a planet - we are the ones who are causing the problem for our mother Earth and it is our responsibility to change it. Every individual has a power to bring in a change. We should fight climate change together" said Ayesha.

Kingsley Odogwu from Fridays For Future in Nigeria shared how the government had initially used a terror law to shut down the website of Fridays For Future but later revoked the order. "It is the step in right direction as it was an attack against our future."

Zeno from Youth For Climate in France called for restarting the economy with climate measures in it. "We [rich nations] are in large part responsible for it [climate crisis] and our leaders refuse to see that. That is why we need to work and that is what motivates us."

Shelani Palihawadana, Sri Lanka's youth activist on disability and gender rights, said that the island nation is among the top ocean polluters in terms of releasing plastic.

Citizen News Service (CNS) specializes in in-depth and rights-based, health and science journalism. For more information, please contact: www.citizen-news.org or @cns_health or www.facebook.com/cns.page
Related Topic(s): Better World Campaign; Climate; Corona Virus Coronavirus Covid-19; Equality; Nature; Pandemic; Rights, Add Tags
Add to My Group(s)
Go To Commenting
The views expressed herein are the sole responsibility of the author and do not necessarily reflect those of this website or its editors.