With respect to Honest Abe on his birthday (February 12), I update his Gettysburg Address. 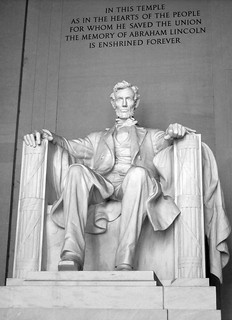 Two centuries and nearly two decades ago, our fathers brought forth a new nation, conceived in liberty, and dedicated to the proposition that all men are created equal.

We have improved since that time. "Men" has come to include women. African Americans have acquired their other two-fifths.

Since that time, our great nation has cultivated the prairies, invented vaccines and flown to the moon. We the People have done much to form a more perfect union.

But we aren't done yet. African Americans were freed from slavery but sentenced to convict labor and eventually prison - where they are legally barred from voting but count in full for someone else's political apportionment. Women can vote but still earn 77 cents on the male dollar and occupy only 20 out of the 100 seats in our US Senate. One in five of our children goes to bed hungry.

Now we are engaged in a great civil war, testing whether our nation, or any nation conceived as ours, can still endure. Our government is being taken away from us. Campaigns have become auctions. House districts are gerrymandered. Corporations are legally people. Unlimited anonymous deceitful attack ads are protected as free speech; efforts to counter them are decried as fascism.

Our roads are crumbling, bridges collapsing and trains running off the rails. The common goods that unite us as a people - from public schools to the air we breathe - are ground into the dust. Corporate "speech" is protected more than the right to vote.

It falls to us, the people, to be dedicated to the unfinished work of perfecting our union. We hereby resolve that previous generations shall not have worked in vain. We resolve that this nation, our one nation under God, shall have a new birth of freedom - and that government of the people, by the people, for the people, shall not perish from the earth.

Eric Lotke has cooked in five-star restaurants and flushed every toilet in the Washington D.C. jail. He has filed headline lawsuits and published headline research on crime, prisons, and sex offenses. His most recent book is Making Manna.

Related Topic(s): Abraham Lincoln; Birthday; Corporations; Fascism; Freedom; Gettysburg; Slavery, Add Tags
Add to My Group(s)
Go To Commenting
The views expressed herein are the sole responsibility of the author and do not necessarily reflect those of this website or its editors.

Steel City: Forgotten But Not Gone

Baltimore Burning. Foreseen in the Data.

Obama's Home And The Report Is Out: China Takes Us To School