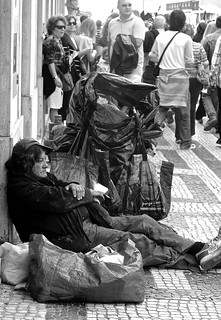 Homelessness has been an issue in America since the 1640s. Back then it was believed that if you were a good Christian, under God's grace, you would have everything you needed; thus, you would not be homeless. Although that is not the stigma that comes along with homelessness now, the homeless face other types of scrutiny.

Many cities throughout the United States have essentially made it illegal to be homeless. This puts the homeless in jail, then back on the street, making it hard to get a job due to a criminal record, therefore remaining homeless, and getting thrown in jail again.

This vicious cycle benefits no one and harms everyone.

No Food for You

Not only is it illegal to be homeless in some cities, but in others it is illegal to feed the homeless. Recently in Fort Lauderdale, FL, a 90-year-old WWII veteran was arrested twice in one week for feeding the homeless due to a new law criminalizing the act of food-sharing. Understandably this effort is geared toward helping the homeless to not be dependent on others for living but to find stable ground themselves and get off of the street. Dr. McLaughlin from the University of New England says that the longer homeless people are receiving help by social services, etc., "the less likely they are to get motivated and look for work."

But in America, Home of the Brave and Land of the Free Handouts, why take away food from those who need it most? When people are hungry, they often turn to crime. Just ask Aladdin: "Gotta eat to live, gotta steal to eat." Lucky for these poor souls, they at least get fed in jail.

The Price is Wrong

When you think of the homeless community, typically you think about poverty. But what you probably don't think about is how much money it is costing the city, and ultimately costing you.

Recently Salt Lake City, UT has been working on a different approach to end homelessness. The director of the Utah Homeless Task Force, Lloyd Pendleton, says that in Salt Lake they spend "about $20,000 per person, per year, on the street, because of [a chronic use of] emergency services." Money is spent on making arrests, putting people up in prison, feeding them in prison, and putting them back on the street. The big problem here is that this is not a solution, it's a Band-Aid.

The Price is Much Better

Marcus Oakes is a Boise, Idaho native. He is currently studying forensic psychology through the University of North Dakota. He is a huge sports fan and will show you why you are wrong if you try and debate with him about anything sports (more...)

Related Topic(s): Homelessness; Housing; Salt Lake City, Add Tags
Add to My Group(s)
Go To Commenting
The views expressed herein are the sole responsibility of the author and do not necessarily reflect those of this website or its editors.