Before practicing Transcendental Meditation (TM), it was mayhem at our school. A lot of fights were going on, basically every day. People were not friendly, they were mean. When I learned it I noticed it was different, because TM is not just closing your eyes, it is deeper than that. It makes you feel better, makes you more energized and it takes away all your stress. It really, really helps. - 7th grade student

I used to be really fidgety, I used to move a lot, couldn't' stay in my seat for very long. Now after meditating I can sit down for a whole class without standing up. Before practicing TM, it was hard for me to concentrate; after practicing TM, I could concentrate very well. - 7th grade student

Post-traumatic stress disorder, PTSD, a chronic and debilitating condition, arises from life-threatening and deeply traumatic events: war, sexual abuse, violence and natural disasters. Symptoms include nightmares, flashbacks, anxiety, fear, hyper-vigilance, emotional numbness, anger, and violent behavior, often leading to the abuse of drugs and alcohol. PTSD is a chronic, debilitating condition that may last a lifetime if not treated effectively.

PTSD is pandemic across Africa and a major problem in many areas of the world. Dr. Eugene Allers, past-president of the South African Society of Psychiatrists, estimates that as many as 25% of the population in South Africa suffer from PTSD. Research indicates that a significant number of children and adolescents in South Africa are exposed to high levels of traumatic experience, often witnessing or experiencing violence of a criminal or domestic nature. (Ensink, Robertson, Zissis & Leger, 1997; Pelzer, 1999; Seedat, van Nood, Vythilingum, Stein & Kaminer, 2000; Suliman, Kaminer, Seedat & Stein, 2005).

On February 19, Psychological Reports published on-line a research study showing that Transcendental Meditation (TM) is also effective in the treatment of PTSD. TM may be used by itself or in conjunction with psychotherapy, pharmaceuticals, and other PTSD reduction therapies. Practice of TM twice a day for 15 to 20 minutes enabled a group of university students in South Africa with PTSD to score below the threshold for PTSD in 105 days. This same group showed significant recovery from depression. A comparison group with PTSD who did not learn TM showed no change in PTSD or depression levels over the 105 days of testing. This study is the fourteenth peer reviewed scientific paper on TM and PTSD. TM may be also be used in conjunction with traditional PTSD reduction strategies support the recovery process.

Students at the Maharishi Institute (MI) and University of Johannesburg (UJ) with similar demographic backgrounds were first tested for PTSD by the Post-Traumatic Stress Disorder Checklist for civilians (PCL-C). Those students with high risk of PTSD were then evaluated by a certified psychologist. Students who were deemed to have PTSD by the psychologists were enrolled in the study. They were re-tested at 15, 60 and 105 days. They also received the Beck Depression Index, a standard test of depression, because depression often accompanies PTSD.

The MI group was taught TM a few days after taking the baseline tests on day 1. The UJ students continued with their daily routines without any PTSD reduction interventions.

Within 15 days, the TM group showed a clinically significant drop in PTSD symptoms and their depression scores went from mild depression to below the threshold for depression. 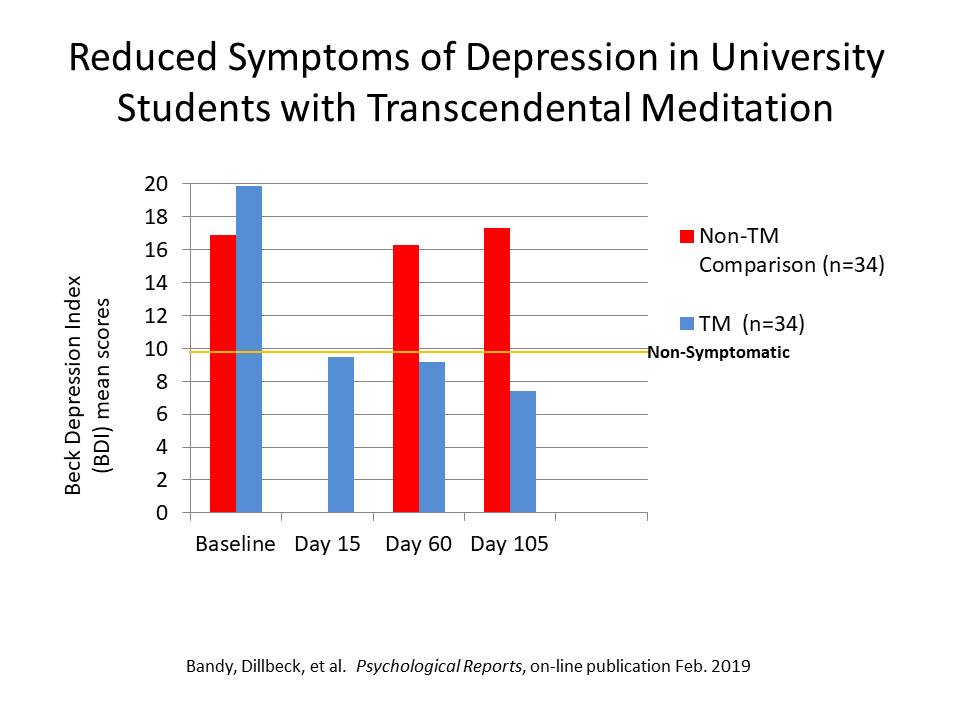 By the completion of the 105 days, the MI students' PTSD scores on the PCL-C had fallen below the threshold for PTSD. They stayed out of depression from day 15. 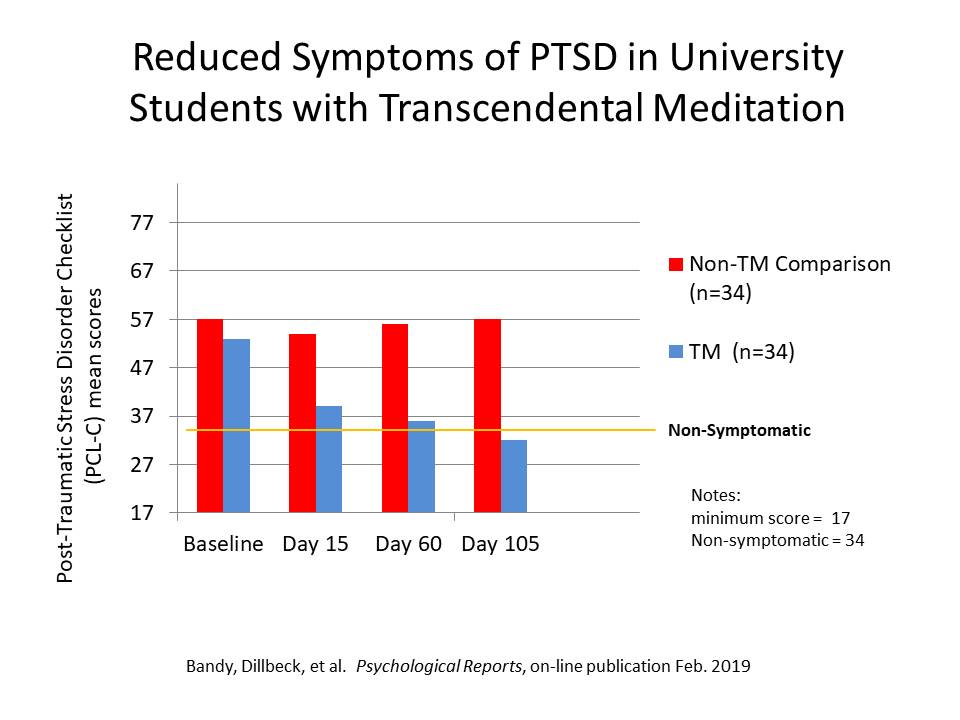 The UJ students showed no significant drop in symptoms for either PTSD or depression during the study. They were invited to learn TM after the study.

Founding President of African PTSD Relief a 501C3 non-profit US Corporation.
Related Topic(s): Anxiety; Depression; PTSD; People; People; Psychologists; Psychology; Recovery; Recovery; Students; (more...) Students-Youth; Trauma, Add Tags  (less...)
Add to My Group(s)
Go To Commenting
The views expressed herein are the sole responsibility of the author and do not necessarily reflect those of this website or its editors.

Russell Brand: I am an Addict

Time for Re-training: Time for Healing