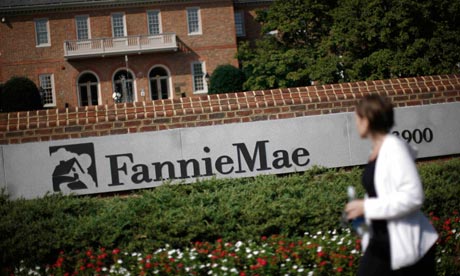 President Obama's announcement of his plans for a restructured mortgage market was painful for those who remember the bubble and crash. It seems as though he learned nothing from this disaster.

The key problem in the bubble years was the ability of private actors to profit by taking huge risks in issuing and securitizing bad mortgages, while handing the downside risk to taxpayers. This was the story with Countrywide, Bank of America, Goldman Sachs, Citigroup and the rest.

It was also the story with Fannie Mae and Freddie Mac in their prior incarnation, before the collapse of the bubble sent them into conservatorship. The pre-conservatorship Fannie and Freddie were run as for-profit companies. Their top executives made Wall Street-type salaries, pocketing tens of millions of dollars a year.

While Fannie and Freddie had been created by the government and ostensibly had a public purpose in promoting homeownership, there can be little doubt that profit figured most prominently in their business strategy. When Freddie decided to jump big-time into the subprime market in 2006 -- just as it was collapsing -- the motive was increasing market share and profit, as this Moody's analysis makes clear.

The moral hazard problem of the pre-crisis Fannie and Freddie -- private profit and public risk -- was eliminated when they went into conservatorship. In the last five years, they have been operated to sustain the housing market, together buying up more than 80% of the mortgages issues since the onset of the crisis.

Given that both are now covering their costs and making profits, which are, arguably, too large even, it's difficult to see what the problem is. But President Obama wants to wind them down and replace them with a new and ostensibly improved public-private system.

While we don't know the details of what the new system will look like, the basic story is clear. Private banks like Goldman Sachs, Citigroup, Bank of America will again issue mortgage-backed securities (MBS). Unlike the MBS of the bubble years, these new issues will carry an explicit government guarantee.

In this new system, there will be a requirement that investors in the MBS absorb some loss before the guarantee kicks in. This is supposed to ensure that they don't game the system by pumping out MBS filled with junk mortgages. And the whole system will be carefully regulated.

Readers can be excused if they are feeling some seriously unpleasant deja vu reading this. Yes, we have seen this movie before -- and we might already be in the second reel.

In the immediate aftermath of the crash, there was a widespread insistence that MBS issuers would have to keep a substantial stake in the mortgages they put into MBS. Some were arguing that they should have to hold 20% of these mortgages on their own books. This quickly got whittled back to a much more modest 5%.

Then, it was decided that high-quality mortgages with down-payments of more than 20% would not require any reserve. The industry decided this was still too restrictive. They lobbied to have the requirement weakened so that issuers don't have to hold reserves against mortgages with as little as 5% down, even though these mortgages defaulted at 3-4 times the rate of mortgages with 20% down in the years preceding the crisis.

Another highlight of the bubble was the gaming of ratings by the credit-rating agencies. It turns out this is back, also. The New York Times reported last week that Standard and Poor's had lowered its standards for rating commercial mortgage-backed securities and had won more business doing so.

Dodd-Frank did have a provision to eliminate this problem. Senator Al Franken (Democrat, Minnesota) proposed an amendment under which the Securities and Exchange Commission (SEC) would select the rating agency rather than the issuer, thereby eliminating the incentive for rating agencies to shop for business with inflated ratings. Even though the Franken amendment passed overwhelmingly, with bipartisan support, the conference committee decided the SEC should study the issue.

After three years, and dozens of industry comments, the SEC issued its report saying that it lacked the ability to pick bond-rating agencies. Therefore, we're back with the same cesspool we had before the crisis.

In short, there is no reason to believe that the current regulatory structure will protect us from the worst abuses of the bubble years.

Dr. Dean Baker is a macroeconomist and Co-Director of the Center for Economic and Policy Research in Washington, D.C. He previously worked as a senior economist at the Economic Policy Institute and an assistant professor at Bucknell University. (more...)
Related Topic(s): Banks; Fannie Mae; Freddie Mac; Housing, Add Tags
Add to My Group(s)
Go To Commenting
The views expressed herein are the sole responsibility of the author and do not necessarily reflect those of this website or its editors.