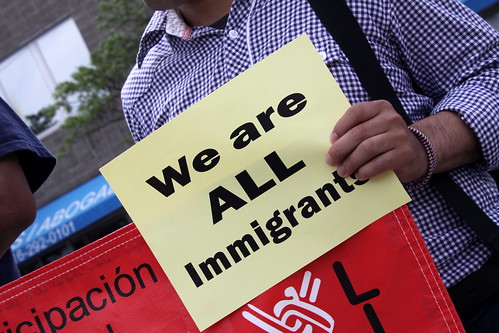 Conservatives often use the national-home argument to justify their support of a system of immigration controls. They say that America is a "national home," one owned and controlled by the U.S. government. As the owner of the "home," the argument goes, the U.S. government has the "right" to lock the door and determine who to let into its home. Conservatives sometimes say to me, "You lock your front door, Jacob, and you don't let everyone into your home. Why shouldn't the federal government have the 'right' to do the same with our home?"

The answer is that America is not a national home. Whenever I receive this argument from conservatives, I tell them that they're thinking about Cuba, where the government owns or controls everything. Since the government is the sole employer or controller of everything in the country, it stands to reason that it's going to consider the nation to be a national home, one whose door it is able to lock.

The United States, on the other hand, is founded on the principle of private property. Here, people are free to own their homes, ranches, farms, lots, businesses, and other real and personal property. Under the principles of private ownership, they have the right to do anything they want with their own property. That's because it belongs to them, not to the government.

Thus, if I want to invite a Mexican citizen into my home, that is my right. That is what private property is all about. It's mine, not the government's. It is also freedom of association is all about, which is an essential aspect of liberty, which is a fundamental, natural, God-given right, one that precedes government. As such, neither the government nor anyone else can interfere with who I decide to invite into my house. I am free to unlock and open my door to anyone I want.

The same holds true for any business I own. It's mine, not society's and not the government's. As such, I have the right to employ anyone I want, including Mexican citizens. It's my money, not society's and not the government's. If people don't like the fact that I'm hiring Mexican citizens in my business with my money, they don't have to patronize my business. They can go elsewhere.

For example, every day countless Marylanders cross the Potomac River and enter Virginia. No one knows how many because the government doesn't keep track. Some of them might be coming to Virginia to steal jobs, open businesses to compete against Virginia businesses, sell things in competition against Virginia companies, sell or buy things, increase the trade deficit between Maryland and Virginia, or even murder, rape, steal, or commit an act of terrorism. None of that is enough to justify letting the Virginia government begin controlling the border.

Some conservatives argue that if all the roads were privately owned, the private owners would discriminate against foreigners by refusing to let them travel on their roads. Therefore, they say, the government, as the owner of the roads, should prohibit foreigners from using when or after they cross the border. They are just projecting their own prejudices. After all, millions of Americans are renting or have sold housing to an estimated 11 million illegal immigrants here in the United States. Moreover, countless businesses have hired most of those 11 million.

Why do homeowners and business owners do that? In large part because they like the color of money. There is every reason to believe that private owners of roads would be equally inclined to like the color of money. Nonetheless, as long as government owns the roads, we Americans should continue standing fast and refuse to permit the government to discriminate against anyone on the basis of race, color, creed, sex, or national origin. Anyone should be free to use the government's roads.

Related Topic(s): Conservatives; Immigrants; Immigration Bill; Immigration Customs And Enforcement; Immigration Legal; Jobs; Liberty, Add Tags
Add to My Group(s)
Go To Commenting
The views expressed herein are the sole responsibility of the author and do not necessarily reflect those of this website or its editors.