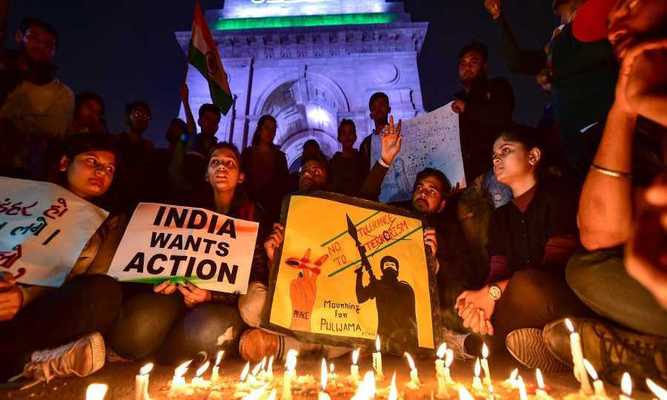 The present theme in our sick English mainstream media is that Kashmiri students en masse are leaving for home out of fear in the wake of the Pulwama attack.

Even though no attack has been mounted on any individual Kashmiri in the country, these newspapers have built a theme around two institutes in Dehra Dun where protesting crowds have forced a promise that no Kashmiri student would be allowed to study from next session onwards.

All of a sudden, we have pictures of Kashmiris waiting at railway stations; unnamed Kashmiris voicing their fears and NCP's Omar Abdullah and PDP's Mehbooba Mufti, who rely on votes in the Valley, asking Centre to ensure the safety of state's subjects around the country.

It seems such a coordinated campaign in our newspapers and its effectanger on Pulwama being replaced with guilt on Kashmiri studentsis evident.

Even though both the CRPF and Uttarakhand Police have made public pronouncements about no incident of any Kashmiri being attacked, the impression of Kashmiris under siege is being steadily built in English newspapers.

On the contrary, little is being highlighted of cases being reported of celebration of Pulwama attack by anti-national elements. NDTV has done not more than a slap on the wrist of its journalist, Nidhi Sethi who posted a horror tweet on the Pulwama attack; Vinod Dua of #MeToo infame keeping mum on his daughter's bizarre rant on the most dastardly killing of 40 CRPF jawans

Prominent display is being given to the calls of HD Kumaraswamy and Mehbooba Mufti for a dialogue with Pakistan even though we have evidence of last seven decades that talks have led to no change in Pakistan's attempt to destabilize India through proxy war in Kashmir and elsewhere.

No newspaper has condemned the almost shambolic lunacy of West Bengal's CM Mamata Banerjee calling the strong words used by Narendra Modi and Amit Shah as a "shadow war" to help them win the 2019 General Elections. "Why no action against Pakistan has been taken in the last five years"when election is knocking on the door, you have felt a need to wage a war," a maniacal Banerjee has asserted.

Nor any pressure is being brought to bear on disruptive Prashant Bhushan who has drawn an analogy with "Afghanistan and Iraq" with the situation in Kashmir. It's the same Bhushan to forced a midnight hearing at the Supreme Court in a bid to commute death sentence of terrorist Yakub Memon to life imprisonment.

While we are being fed with the narrative of "talks with Pakistan" and "guilt" on Kashmiri students, It's worth reminding that anger finds its own way of expressing itself. Peaceful overtures towards Valley has gained India little: only blood and more blood. Maybe the fallout in rest of the country could make the Valley locals reconsider their alleged support to secessionist forces and the resultant economic and social sanctions.

Related Topic(s): Election; Fake Media; Media; Newspapers, Add Tags
Add to My Group(s)
Go To Commenting
The views expressed herein are the sole responsibility of the author and do not necessarily reflect those of this website or its editors.