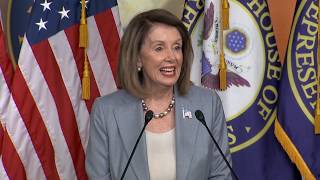 Would the American people re-elect a president caught in the midst of a multi-faceted impeachment inquiry? One never knows.

Or would the American people be more likely to re-elect a president free from any impeachment inquiry?

With no commanding presidential candidate likely to emerge till well after the Iowa caucus on February 3, 2020, the center of Democratic Power is now in the House of Representatives, largely in the hands of Speaker Nancy Pelosi. Pelosi is so determined to give Trump a pass on impeachment that Trump's lawyers cite her position in their court briefs. That seems like a pretty bad place for a supposed opposition party to find itself.

Pelosi and other Democratic Party leaders have indicated a willingness to pursue impeachment if "the people want it." Then the same leaders do little or nothing to encourage the people to want it. That is the opposite of leadership. That is also a failure to understand how the impeachment of Richard Nixon became supportable through the conscientious evidence-gathering that persuaded the public that Nixon had committed impeachable offenses.

Pelosi is slippery to the point of dishonesty on the question of impeachment. New York Times columnist Maureen Dowd wrote a long wet-kiss article titled "It's Nancy's Parade" in the Sunday Times of July 7. Dowd asked Pelosi if she had said about Trump, as reported, "I don't want to see him impeached, I want to see him in prison." That's a classic false-choice deflection to begin with, but Pelosi danced it disingenuously further:

"I didn't exactly say that... You can't impeach everybody. People wanted Reagan impeached but that didn't happen. O.K., they impeached Clinton for something so ridiculous getting impeached for doing a dumb thing as a guy. Then they wanted to impeach Obama... [Trump] has given real cause for impeachment."

This is scattershot distraction Trump-style, seeming to make some point while avoiding the underlying question. If Trump, as Pelosi says, "has given real cause for impeachment," then why has the House not begun to impeach him?

There is a glaring omission in Pelosi's list of recent presidents Reagan, Clinton, Obama, but neither Bush. The second Bush lied the country into war, a war that continues to cost us. Even that was not enough for Pelosi. She opposed impeaching Bush for the war crimes he so plainly committed. Does she lack principle? Does she lack courage? Does she always make her decisions on the narrowest partisan political calculation? What is really going on?

Democrats have the power to initiate impeachment proceedings. Democrats have the power to control the pace of those proceedings. There are numerous impeachable offenses, in almost every area climate, immigration, census, war-making, regulating contrary to statute, emoluments the list of failures to faithfully execute the laws or the office of the President is long and easily demonstrated. Even Pelosi says, "he every day practically self-impeaches by obstructing justice and ignoring the subpoenas" -- which he is allowed to do with impunity.

There are about 80 Democratic House members reportedly in favor of moving ahead on impeachment. That leaves another 155 Democratic House members either uncommitted or opposed to impeachment. These Democrats are not outspoken on the question and many of them oppose impeaching a flagrantly dishonest, probably criminal president, mainly because it might put their own re-election at risk. No profiles in courage there. We saw them flex their muscles recently when they forced Pelosi to capitulate on protecting immigrant children and accept the Senate bill that would do little to assure that the Department of Homeland Security follows the law.

Pelosi misleadingly talks about impeachment, characterizing it as if it's a compact, unitary event. It's not. "Impeachment" itself is only a formal accusation, a Congressional indictment that requires an investigation of uncertain length by the House Judiciary Committee, including having hearings, drawing of articles of impeachment, publicly debating and voting on them, and delivering those approved to the full House for a final vote. Only then do the articles of impeachment go to the Senate for a trial of indeterminate length and a final vote.

The impeachment process for Bill Clinton began in January 1994 with the appointment of a special prosecutor (Ken Starr took over in August 1994). The process ended more than five years later when the Senate acquitted Clinton on February 12, 1999.

As of July 9, the November 3, 2020, presidential election was 483 days away. That is plenty of time for the House Judiciary Committee to accomplish something meaningful without having to risk defeat in the Senate.

So it's a calculated question for 2020: Would a prolonged, careful, substantive impeachment inquiry make Trump stronger or weaker by election day? Would a prolonged period of sniping at Trump's faults, without daring to impeach him, make Trump stronger or weaker on election day? Regardless of who the Democratic candidate turns out to be, it seems more likely that he or she will be strengthened by a House impeachment inquiry carried on with integrity before the election. Yes, it will be partisan, but that is offset if it is also principled. But first, Pelosi has to help it happen. According to Dowd:

Vermonter living in Woodstock: elected to five terms (served 20 years) as side judge (sitting in Superior, Family, and Small Claims Courts); public radio producer, "The Panther Program" -- nationally distributed, three albums (at CD Baby), some (more...)
Related Topic(s): Democrats; Failure To Act; IMPEACHMENT OFF THE TABLE PELOSI; Impeach Trump; Trump Impeachment, Add Tags
Add to My Group(s)
Go To Commenting
The views expressed herein are the sole responsibility of the author and do not necessarily reflect those of this website or its editors.