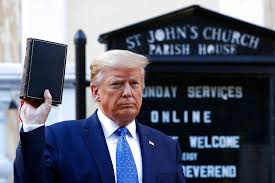 You'll never convince me that theology is unimportant or irrelevant to politics.

Early last week, President Trump had Lafayette Park cleared of protestors for a Bible-waving photo-op in front of St. John's Church. Evidently, his specifically theological point was to assure everyone that God is somehow on his side and that of the DC police in their fight with the peaceful protestors he called "thugs" and "terrorists." The president implied that God supports his and the cops ham-handed attempts to quell the general uprising sparked throughout the country (and the world) by the brutal murder of George Floyd, yet another unarmed black man executed by the police state Mr. Trump now heads.

The presidential photo-op underscored not only the tone-deaf cynicism of the current occupant of the White House. It highlighted as well, the identity of the three-personed God he and his white "Christian" supporters actually worship. It's not the God of Jesus.

I bring that up, because today is Trinity Sunday - a day that calls attention to the mysterious Christian belief that almost no one can coherently explain. It's the faith that there are three persons in one God: Father, Son, and Holy Spirit.

Today in these remarks, I'm setting aside any concern with obscure, esoteric explanations of that rich mystery so often trivialized into some sort of mathematical problem. (It has been well explained most recently by Richard Rohr in his The Divine Dance. Highly recommended.)

My point instead is to redirect its understanding in a more immediate way intimately connected with what's happening now in our city streets. It is to explore the mysteries of the real Trinity that we Americans actually worship. It's a divinity Americans call on to solve any problem you might imagine. I'm talking about the deity called Violence. Yes, as what Dr. King called "the greatest purveyor of violence in the world," our nation worships Violence Itself.

Our reverence for this quasi-divine being is revealed in our vicious cultures of police and military so evident in our cities these days. It's revealed in our worship of guns, in our "defense" budgets, in our films, and in the wars our nation more than any other on the planet initiates and sustains throughout the world.

Like the traditional Trinity, our God of Violence also has three manifestations. There is Violence the Father, Violence the Son, and Violence the Evil Spirit. Let me try to explain.

Violence the Father: This is the invisible power that shapes all of our lives. Sociologists refer to his domain in terms of "structural violence." He is the creator of every society's status quo - the form of mayhem that begets most of its other manifestations. This violent divinity is the one in whom we Americans live and move and have our being; he's like the air we breathe; we don't even notice his presence. Yet our simple participation in the world-as-we-know-it transforms us into his votaries.

Worldwide, this is the God who allows 15,000 children to die each day of absolutely preventable poverty and hunger. Most commonly, they are victimized by ailments as simple as diarrhea caused by contaminated water. But all those children die at our system's hand just as surely and predictably as if executioners put guns to their heads and pulled the trigger 15,000 times every 24 hours. The God of the status quo endorses every shot.

Violence the Father also underwrites ghettoes, decrepit schools, food deserts, and structural unemployment. He makes sure drinking water is contaminated by lead, that borders are closed to refugees and asylum seekers, and that the air in poor communities is unbreathable.

For the police, he's the patron of "qualified immunity." That's the legal doctrine that encourages law enforcement crime. In practice, it guarantees that police will never be convicted of any crime unless their attorneys prove unable to turn up a single cop anywhere in the world who wouldn't have acted similarly in a similar situation. What a joke!

Americans love Violence the Father. We're convinced his order is the best human beings can achieve. After all, we live in "the greatest country in the world." [We say that with a straight face, even though (if we opened our eyes) we would see clearly that other better countries are all over the map. However, our fundamentalist religious brainwashing masquerading as "patriotism" just won't let us go there.]

Related Topic(s): America Culture Of Violence; America Is A Christian Nation; Christianity; Faith; God; Jesus; Non-Violence; Protestors; Rebellion; Spiritual; (more...) Sunday; Violence, Add Tags  (less...)
Add to My Group(s)
Go To Commenting
The views expressed herein are the sole responsibility of the author and do not necessarily reflect those of this website or its editors.