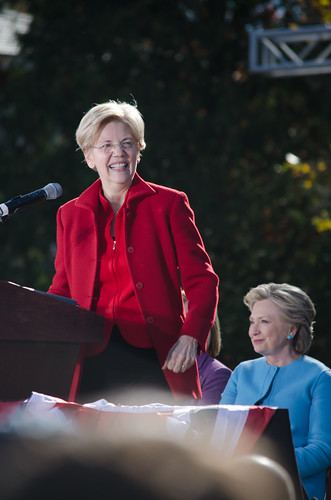 "They've bulldozed the competition, used our private information for profit, undermined our democracy and tilted the playing field against everyone else."---Elizabeth Warren.

The word got out that Mark Zuckerberg, Founder and CEO of Facebook, recently informed his employees that he would fight like hell against the "existential" threat posed by US Senator and Democratic presidential candidate Elizabeth Warren.

Had he tried he could not have orchestrated a more effective endorsement of Warren's candidacy for president. Those of us who subsist on less than ten digits in annual income can safely assume that Zuckerberg has no concept of a true existential crisis. He may have dreams of global domination but he certainly has no understanding of the scourge of monopolies on a free market economy.

It seems Warren has the audacity to propose breaking up the social media monopolies, noting that Facebook has swallowed Instagram and WhatsApp and together they dominate to the tune of 85% of the American market. If Warren succeeded in breaking up the dominant platforms, she argues that they would compete in protecting user privacy and assert greater effort at combating the sort of mass misinformation that corrupted our last presidential election. [1]

Zuckerberg's counter argument is reminiscent of the big three automakers, the railroads and Standard Oil arguing for their monopolies. The historical monopolies claimed that only they had the resources to serve the public interest. Zuck argues that only Facebook has the power and money to combat misinformation and foreign interest. The problem of course is that Zuck and company lack motive. Just like John D. Rockefeller and Henry Ford, their primary motive is to boost market share and the profit margin.

Mark Zuckerberg has never demonstrated a social consciousness. He responds with evasion, obfuscation and misinformation every time Facebook faces criticism. Even if we could believe in his philanthropic values we should not. History instructs us that corporate entities always serve their own interests. Always. Without exception. How much power and wealth does Zuckerberg need? The answer is and always will be: more!

Where was Zuckerberg's social consciousness when Russian agents spent sizable sums creating fake accounts to distribute false facts and vicious propaganda to targeted populations in Michigan, Pennsylvania and Wisconsin in the 2016 election? Did he know? Yes. He had to know. Several members of Facebook were working directly with Donald Trump's campaign, working alongside rightwing data operation Cambridge Analytica, in formulating advertisements and targeting Facebook users. An estimated 126 million users were exposed to Russian propaganda and 85 million had their data stolen by Cambridge Analytica. [2]

There is no doubt that Russia used Facebook and Zuckerberg profited. At his appearance before congress in April 2018 he testified that "tens of thousands" of fake accounts were identified and taken down in 2017 after the election. His solution for new verification requirements can easily be bypassed with shell companies and fake identifications. [3]

Zuck failed to answer questions about the data Facebook provides Russian and other foreign agencies where Facebook operates. Russia requires Facebook to store their data in Russia where they can access it. The irony is rich in that Zuck refuses to share data with the US government.

I'm not suggesting that Facebook should share its data with the US government. I am suggesting that it should not be sharing personal data with any government. As it now stands corporations like Facebook operate in a Wild West environment where anything goes. We have no way of knowing what data it retrieves and stores for analysis and what data it buries. Moreover, we have absolutely no reason to trust Zuckerberg and his loyal minions.

No one on the congressional committee thought to ask Zuckerberg what kind of assistance his employees provided to Russia agencies like the Internet Research Agency. If they provided data used to target voting populations in critical states, their complicity in defrauding the 2016 election would be significant.

When you take a closer look at the services Facebook typically provides its corporate customers it becomes highly probable they conspired with Russian interests in tipping the election. For example, they provide a "custom audience" application that matches your message with a receptive audience.

Between tech talk that no one outside the industry understands Zuckerberg repeatedly asserted that users have the power to control their own data. Really? The truth is we have no idea what Big Brother does with the data we provide. He repeatedly said they do not sell user data. That is only true in the most abstract sense. They use our personal data to feed algorithms that they then sell to advertisers who have something to sell to you. Without your data there would be nothing to sell.

It goes on and on but the bottom line is clear. Zuckerberg is no friend to American democracy or the public interest. He and his people are smart enough to find ways to sell you out a million times over and make unconscionable sums of money doing it.

Jack Random is the author of The Jazzman Chronicles and the founder of Crow Dog Press. His novels include Wasichu: The Killing Spirit, Number Nine: The Adventures of Jake Jones and Ruby Daulton, Ghost Dance Insurrection and A Patriot Dirge in (more...)

Related Topic(s): Color Of Change Petition To Facebook; Elizabeth Warren; Facebook; Facebook Jail; Mark Zuckerberg; Senator Elizabeth Warren; Zuckerberg-mark, Add Tags
Add to My Group(s)
Go To Commenting
The views expressed herein are the sole responsibility of the author and do not necessarily reflect those of this website or its editors.

Mr. Robot and the Angry Moderates

A Long & Winding Road: The Rise of Mayor Pete

The Fall of Bolivian Democracy

A Long & Winding Road to the White House