It's everyone's fault except the U.S. and Israel 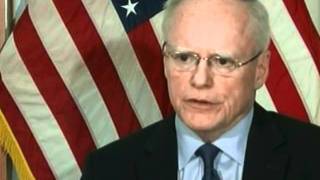 The first week in February was memorable for the failed impeachment of President Donald Trump, the "re-elect me" State of the Union address and the marketing of a new line of underwear by Kim Kardashian. Given all of the excitement, it was easy to miss a special State Department press briefing by Ambassador James Jeffrey -- held on February 5th regarding the current situation in Syria.

Jeffrey is the United States Special Representative for Syria Engagement and the Special Envoy for the Global Coalition to Defeat ISIL. Jeffrey has had a distinguished career in government service, attaining senior level State Department positions under both Democratic and Republican presidents. He has served as U.S. Ambassador to both Turkey and Iraq. He is, generally speaking, a hardliner politically, closely aligned with Israel and regarding Iran as a hostile destabilizing force in the Middle East region. He was between 2013 and 2018 Philip Solondz distinguished fellow at the Washington Institute for Near East Policy (WINEP), a think tank that is a spin-off of the American Israel Public Affairs Committee (AIPAC). He is currently a WINEP "Outside Author" and go-to "expert."

Professor John Mearsheimer of the University of Chicago and Stephen Walt, academic dean at Harvard University 's Kennedy School of Government, describe WINEP as "part of the core" of the Israel Lobby in the U.S. They examined the group on pages 175-6 in their groundbreaking book The Israel Lobby and US Foreign Policy-- and concluded as follows:

"Although WINEP plays down its links to Israel and claims that it provides a 'balanced and realistic' perspective on Middle East issues, this is not the case. In fact, WINEP is funded and run by individuals who are deeply committed to advancing Israel's agenda " Many of its personnel are genuine scholars or experienced former officials, but they are hardly neutral observers on most Middle East issues and there is little diversity of views within WINEP's ranks."

In early 2018 Jeffrey co-authored a WINEP special report on Syria which urged ""the Trump administration [to] couple a no-fly/no-drive zone and a small residual ground presence in the northeast with intensified sanctions against the Assad regime's Iranian patron. In doing so, Washington can support local efforts to stabilize the area, encourage Gulf partners to 'put skin in the game, drive a wedge between Moscow and Tehran, and help Israel avoid all-out war."

Note the focus on Iran and Russia as threats and the referral to Assad and his government as a "regime." And the U.S. presence is to "help Israel." So we have Ambassador James Jeffrey leading the charge on Syria, from an Israeli perspective that is no doubt compatible with the White House view, which explains why he has become Special Representative for Syria Engagement.

Jeffrey s et the tone for his term of office shortly after being appointed by President Trump back in August 2018 when he argued that the Syrian terrorists were "" not terrorists, but people fighting a civil war against a brutal dictator." Jeffrey, who must have somehow missed a lot of the head chopping and rape going on, subsequently traveled to the Middle East and stopped off in Israel to meet Prime Minister Benjamin Netanyahu. It has been suggested that Jeffrey received his marching orders during the visit.

Two months later James Jeffrey declared that he would like to see Russia maintain a "permissive approach" to allow the Israelis to attack Iranian targets inside Syria. Regarding Iran's possible future role in Syria he observed that "Iranians are part of the problem not part of the solution."

What Jeffrey meant was that because Israel had been "allowed" to carry out hundreds of air attacks in Syria ostensibly directed against Iran-linked targets, the practice should be permitted to continue. Israel had suspended nearly all of its airstrikes in the wake of the shoot down of a Russian aircraft in September 2018, an incident which was caused by a deliberate Israeli maneuver that brought down the plane even though the missile that struck the aircraft was fired by Syria. Fifteen Russian servicemen were killed. Israel reportedly was deliberately using the Russian plane to mask the presence of its own attacking aircraft.

Russia responded to the incident by deploying advanced S-300 anti-aircraft systems to Syria, which can cover most of the more heavily developed areas of the country. Jeffrey was unhappy with that decision, saying "We are concerned very much about the S-300 system being deployed to Syria. The issue is at the detail level. Who will control it? what role will it play?" And he defended his own patently absurd urging that Russia, Syria's ally, permit Israel to continue its air attacks by saying "We understand the existential interest and we support Israel" because the Israeli government has an "existential interest in blocking Iran from deploying long-range power projection systems such as surface-to-surface missiles."

Later in November 2018 James Jeffrey was at it again, declaring that U.S. troops will not leave Syria before guaranteeing the "enduring defeated" of ISIS, but he perversely put the onus on Syria and Iran, saying that "We also think that you cannot have an enduring defeat of ISIS until you have fundamental change in the Syrian regime and fundamental change in Iran's role in Syria, which contributed greatly to the rise of ISIS in the first place in 2013, 2014."

As virtually no one but Jeffrey and the Israeli government actually believes that Damascus and Tehran were responsible for creating ISIS, the ambassador elaborated, blaming President Bashar al-Assad for the cycle of violence in Syria that, he claimed, allowed the development of the terrorist group in both Syria and neighboring Iraq.

Related Topic(s): Ambassador; Assad; Israel; James Jeffrey; Policies; Syrian Situation, Add Tags
Add to My Group(s)
Go To Commenting
The views expressed herein are the sole responsibility of the author and do not necessarily reflect those of this website or its editors.