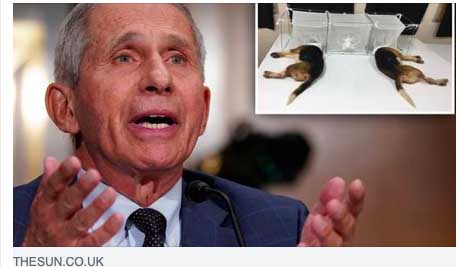 This week major news outlets are reporting that Anthony Fauci's NIH division funded research to lock beagle puppies' heads in mesh cages filled with hungry sand flies so the insects would eat them alive. The dogs' vocal cords were removed so researchers did not have to hear their barking and cries of pain. White Coat Waste Project documented the research which has the public appalled and lawmakers demanding answers.

A few years ago, I interviewed Anthony Bellotti, founder of the White Coat Waste Project for Opednews about these topics. Here is the complete interview..

Bellotti: Yes. $12 billion of tax-payer money a year goes to animal experimentation and the government is the largest funder of animal research in the US. Yet the public is largely unaware of the waste, fraud and abuse, not the mention cost. The White Coat Waste Project is a watchdog group exposing what goes on in government's animal laboratories on the public's dime. If it's not paid for by your taxes, it's not part of our mission.

Rosenberg: Do you have first-hand experience with animal research?

Bellotti: Between junior and senior years of high school, in the 1990s, I worked as an intern in an animal lab at a hospital in Manhattan. For seven weeks I witnessed, heard about, and participated in experiments on pigs, beagles, rats, monkeys and more. I went through what I think a lot of people go through when they encounter animal research. First, you experience "shock and awe" at what is actually permitted and legal. I remember thinking, this is one of the good labs--I hate to think what the bad labs are doing. Then you kind of pull back within yourself and think, "I don't want to make waves." Finally, you decide you will fight back and speak out which is why I founded White Coat Waste Project.

Rosenberg: Exposing animal research is a tough mission. Twenty years ago, we heard of lab break-ins and rescues but today research facilities are triple fortified and some have been put underground. The other tough part is--animal research is always given a scientific mystique. The public is told we can't judge it but it is benefiting us.

Related Topic(s): Animals; Covid-19; Doctor Anthony Fauci; Dr Anthony Fauci Infectious Disease Expert Nih; Government; Government Corruption, Add Tags
Add to My Group(s)
Go To Commenting
The views expressed herein are the sole responsibility of the author and do not necessarily reflect those of this website or its editors.