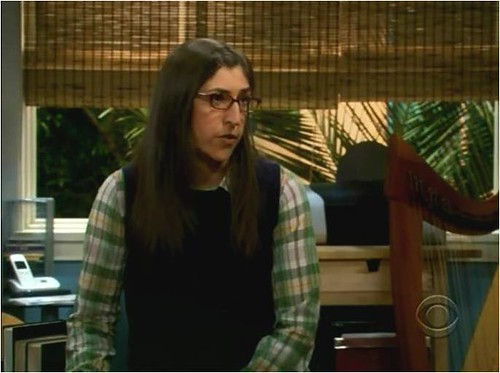 Gigaset C595 on .Big Bang Theory. (CBS)
(Image by Hollywood_PR)   Details   DMCA
Recently, actor and neuroscientist Mayim Bialik - in the wake of the Harvey Weinstein scandal, and the birth of the #MeToo movement - wrote an op-ed reflecting upon her experiences in Hollywood both as a child and adult woman. She received a lot of criticism for that article; read a certain way, it could easily be taken as blaming the victims of sexual harassment and assault.

She wrote of her relative lack of personal experience with such harassment, seeming to credit her unconventional appearance, and her modest dress and behavior. Having read both the original op-ed, and one of the critics, I tend to think that Bialik was not quite given enough credit for her nuanced argument. She clearly states that women should be able to dress however they want. I can also see, however, how her implied causal connection between her experience and her behavior could give feminists pause.

I can related to Bialik. I've never sought to live up to the exacting standards women are bombarded with daily - from media, advertising, the fashion industry, and casual comments. I was the kid whose mom literally chased me around the house saying "Just a little rouge!" I spent much of my time as a teen and young adult fighting tooth and nail against those expectations - I felt them keenly. As I watched my daughters grow up, I looked on with annoyance as they watched shows like "What Not to Wear," with the arbitrary "rules" the hosts imposed on their female guests: one must show some cleavage, and wear shorter skirts. Women who resisted were deemed to have low self esteem. ("Don't ever put me on one of those shows!" I would say.)

I also felt a sense of safety in dressing modestly; anything else seemed to add a layer of vulnerability to the ever-present fear of sexual assault (and for being blamed for it.). At the same time, I know that the protection modesty affords women is illusory. Crime statistics are replete with a broad variety of victims of sexual assault (although college-age women appear to be especially vulnerable.) The "What She Was Wearing" exhibit illustrates the folly of connecting sexual assault to mode of dress. (I was once told by a fellow doctoral student that my sweatpants suit was provocative!)

The problem with the feminist critique of Bialik, however, is its framing of the issue as "victim blaming" vs. "free choice." Given all the pressure I've felt to conform to conventional standards of beauty, I can't see the choice to adopt those standards in a vacuum.

A 2017 research article in the Journal of Eating Disorders, explored the issue of women's response to pressures to sexualize their appearance. They found a relationship between those pressures and college women's self-doubt, anxiety, and self-objectification.

This pressure seems to have intensified, from the time I was a young woman. Suggestive clothing for even pre-pubescent girls seems to have become a popular offering in stores. It's become a topic of so much concern, that The American Psychological Association warned of its negative effects on girls psychological health; as the head of a task force on the matter revealed:

"We have ample evidence to conclude that sexualization has negative effects in a variety of domains, including cognitive functioning, physical and mental health, and healthy sexual development."

So, while the critics of the victim-blaming clearly have a point - even though they might have over-simplified an op-ed - we need to questions where societal pressure ends, and free choice begins.

Related Topic(s): Advertising; Anxiety; Beauty; Crime; Dress; Expectations; Fashion; Female; Girls; Harvey Weinstein; (more...) Health; Hollywood; Media; Victims Of Sexual Harassment; Vulnerability; Women, Add Tags  (less...)
Add to My Group(s)
Go To Commenting
The views expressed herein are the sole responsibility of the author and do not necessarily reflect those of this website or its editors.