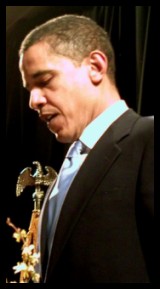 Please don't say we didn't try to warn you. We even caught a bit of flak from folks on the "Left" and were quoted by Brit Hume on Fox "News" for our comments at the time.

Back on April 1, 2007 -- in what wasn't an April Fools Day joke, unfortunately -- The BRAD BLOG highlighted pretty much everything you needed to know about Barack Obama. In the middle of a tense debate over a military spending bill passed by Democrats and threatened with a veto by George W. Bush since it included a requirement for the President to set timelines for a withdraw from Iraq, Obama told AP that even if Bush vetoed the bill, Senate Democrats would simply send back another bill that didn't include the timeline requirement.

In short, he sold out his own caucus by showing their hand and thus paved the way for Bush to call their bluff with a veto without consequence. That's exactly what Bush did.

As we reported at the time...

If we ever need to negotiate for anything, remind us to not call on Obama to represent us.

"I think that it's important for voters to get a sense of how the next president will make decisions in a foreign policy arena," he told AP.

Great. We've just gotten that "sense," and if that's your plan, then thanks but no thanks.

Yes, President Obama has been forced to deal with an unprecedented extremist GOP willing to use terrorists tactics to get their way, creating phony "hostage crises" time and again -- in the latest episode putting a gun to the head of the world economy. But negotiating with terrorists only ensures the likelihood of the bad guys taking another hostage in the future, which the Republicans have repeatedly done, and will continue to do. Capitulating to them, as he has now done time and again, is inexcusable.

Following whatever the resolve may be of this phony debt "crisis" created by the Republicans, the FY 2012 budget debate will very quickly begin and we're likely to see the very same tactics and Republican victory resolution played out all over again. (Bookmark this post for use in October, when the FY '12 year begins and the GOP will be staging another hostage crisis.)

What was clear to us as long ago as 2007 was that Obama was the worst. negotiator. ever. His time in office to date has done nothing to assuage us of that initial assessment, as he has negotiated with himself and capitulated to terror tactics again and again, acceding to virtually ever demand of the hostage takers by the end.

From giving away the store with un-stimulating tax cuts in a much-smaller-than-needed stimulus package, to giving away the public option (much less single payer) right off the bat in the health care reform bill, to capitulating on extending the Bush tax cuts for the rich earlier this year, and now accepting a "bargain" which tosses out everything he had formerly promised to be a "bottom line" for any debt ceiling deal, the President has done almost precisely as he projected he would four years ago when we pointed it out, so that we could "get a sense of how the next president will make decisions."

If you didn't notice then, please don't blame us. We tried to tell you.

On the wonky details of the President's latest capitulation... For one of the best critiques that we've seen to date, on the dangers posed to jobs and the economy by the current Dems-give-all-GOP-gives-nothing "deal," please see Paul Krugman who charges "The President Surrenders." He offers an argument that his "deal" will make things much worse, rather than better, both economically and politically. He says that "we're witnessing here...a catastrophe on multiple levels"...

"Republicans will surely be emboldened by the way Mr. Obama keeps folding in the face of their threats. He surrendered last December, extending all the Bush tax cuts; he surrendered in the spring when they threatened to shut down the government; and he has now surrendered on a grand scale to raw extortion over the debt ceiling. Maybe it's just me, but I see a pattern here."

It's not just you, Mr. Krugman.

The Pulitzer Prize winning economist and columnist goes on to say, mirroring more of our thoughts above, that "the damage isn't over: there will be more choke points where Republicans can threaten to create a crisis unless the president surrenders, and they can now act with the confident expectation that he will."

Also, please see Ezra Klein for a helpful and clear explanation of both the mechanics and politics at play in the "deal" itself, if you're not yet fully briefed on the how bad the agreement was that the President "negotiated." Also see David Dayen's insightful thoughts on the same.

Brad Friedman publishes Bradblog.com
Related Topic(s): Obama Issues Policy; Obamacare; Obamanomics; Paul Krugman; Republican, Add Tags
Add to My Group(s)
Go To Commenting
The views expressed herein are the sole responsibility of the author and do not necessarily reflect those of this website or its editors.