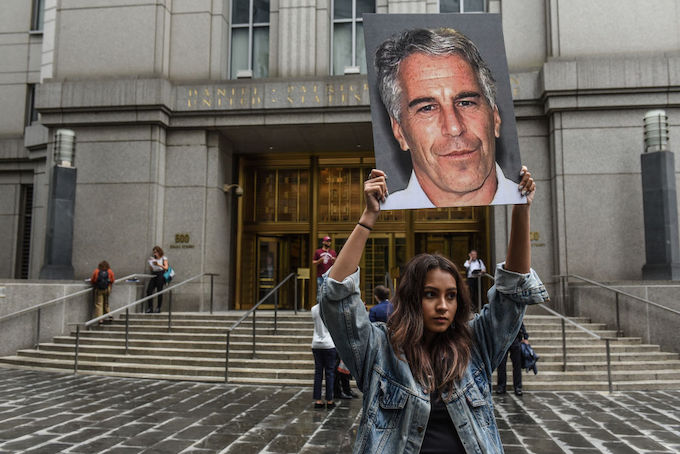 Billionaire Wall Street hedge fund financier Jeffrey Epstein was arrested by federal authorities on July 6 at Teterboro Airport in New Jersey. Epstein was returning on his private jet from a trip to Paris. After his arrest, Epstein was taken to the Metropolitan Corrections Center in Manhattan while awaiting arraignment in federal court at Foley Square on July 8. Epstein's old friend, Donald Trump, was spending the weekend at Trump's Bedminster, New Jersey gold club, 44 miles from the Teterboro airport where Epstein was arrested.

Epstein, who, according to a joint report by WMR and the Justice Integrity Project in Washington, allegedly raped a 12-year-old girl named Maria and a 13-year-old, Katie Johnson, the latter a pseudonym, has been charged by federal prosecutors in New York with one count of sex trafficking and one count of conspiracy to commit sex trafficking. The 1994 rape, according to more than one witness, not only involved Epstein but his then-close friend, Trump. The incident is said to have occurred at a midtown Manhattan mansion owned by retail billionaire Les Wexner, who owns, among other store chains, Victoria's Secret, a prominent employer of underage female models. The 12-year-old rape victim had been abducted in 1993 from a street corner in Waterbury, Connecticut and provided to a child sex trafficking ring.

In 2008, Epstein beat federal charges of underage sexual trafficking of minor girls by agreeing to a non-prosecution agreement (NPA) with the U.S. Attorney's Office in Miami, then headed by Trump's current Labor Secretary Alex Acosta, and the Florida Attorney General's office. The arrangement was called the "deal of a lifetime" by supporters and critics. Had the deal not been drawn up, federal sex trafficking charges brought against Epstein that were contained in a 52-page indictment, could have imprisoned him for life.

Epstein pleaded guilty to state charges of soliciting prostitution from a minor and agreed to serve 13 months, with unsupervised daytime work release, in an isolated wing of the Palm Beach County Stockade. He also was required to register as a sex offender. Epstein also agreed to pay restitution to his victims. In return, the federal government and state of Florida agreed to a lifetime moratorium on future prosecutions of Epstein or any of his other associates and friends.

Various reports have named Epstein longtime mentor Les Wexner; the Duke of York, Prince Andrew; Harvard law professor Alan Dershowitz, as well as Trump, among the "friends and associates" of Epstein covered by the NPA. Several of Epstein's victims, including Virginia Roberts Giuffre, who was an underage "towel girl" at Trump's Mar-a-Lago club in Palm Beach, sued Epstein, charging that their rights under the federal Crime Victims' Rights Act (CVRA) had been violated by Acosta's NPA.

Some of Epstein's Florida victims were as young as 14 and 15, although, as seen in the 1994 incident with Trump, the victims can range lower in age. WMR first reported in January 2015 that case documents ordered unsealed showed that there was a reference to Jane Doe #103, even though previous reports, including those by the West Palm Beach Police Department, indicated that there were some 40 victims of Epstein. The Miami Herald, more recently, said victims numbered about 60. WMR learned from defense lawyers in West Palm Beach that Epstein's victims were not merely limited to residents of Florida and New York but extended around the country to states like New Mexico and around the world to France, Spain, Britain, and other countries.

In February, US Judge for the Southern District of Florida Kenneth Marra ruled, against strong opposition from the Justice Department, that the Acosta NPA violated the CVRA rights of Epstein's victims and he has been deliberating on whether to vacate the agreement. Justice Department attorneys in Miami have been arguing that the 2008 NPA with Epstein must stand.

It is noteworthy that Attorney General William Barr, seen as Trump's personal lawyer and hatchet man, may have known Epstein in the 1970s. In 1973, Donald Barr, the headmaster of Manhattan's elite Dalton Schoola private school for children of some of New York's wealthiest families, hired Epstein, who did not even possess a college degree, to teach mathematics, physics, and calculus. Students attending Dalton at the time included the son of Alan Greenberg, the chairman of the now-defunct Wall Street firm Bear Stearns. In 1976, Greenberg hired Epstein to be a trader at Bear Stearns and the degree-less math teacher soon became a billionaire. Others attending Dalton during Epstein's tenure include actresses Jennifer Gray and Tracy Pollan and television's "Bizarre Foods" chef Andrew Zimmern. Epstein's association with Barr have some observers jokingly referring to the matter as the "Epstein-Barr" case.

Over the last several months, the Miami Herald has run a series of exposes, written by reporter Julie K. Brown, exposing further details of the NPA and have identified more of Epstein's victims.

The U.S. Attorney's Office for the Southern District of New York (SDNY) filed the most recent criminal charges against Epstein. The charges were contained in a sealed indictment and cover sex trafficking between 2002 and 2005 and occurring in Palm Beach and New York City. 2002 is the year that Trump said of Epstein, "I've known Jeff for fifteen years. Terrific guy. He's a lot of fun to be with. It is even said that he likes beautiful women as much as I do, and many of them are on the younger side."

What is most interesting is the fact that the SDNY's Public Corruption Unit (PCU) is handling the case against Epstein. This has raised eyebrows among experienced former federal prosecutors because it indicates that the Epstein case may involve malfeasance in office by government officials. Also, one of the SDNY prosecutors handling the Epstein case in Maureen Comey, the daughter of former FBI director James Comey, who Trump fired in 2007 during a fit of rage. Ms. Comey, a graduate of Harvard Law School, has been with the SDNY since 2015 and is with the Office's Violent and Organized Crime Unit. WMR has compiled a 'massive database showing thousands of Trump links to organized crime elements in New York and elsewhere'.

There have been a number of other legal cases involving Epstein in recent months. The Justice Department's Office of Professional Responsibility (OPR) has been investigating the role of Acosta in hammering out the NPA with Epstein's lawyers, who, at the time of the agreement, included Whitewater special counsel Kenneth Starr, Dershowitz, and famed Miami celebrity attorney Roy Black. Ironically, even as OPR is investigating the legitimacy of the NPA, Justice Department lawyers are arguing in federal court in Miami that it is inviolable and must stand. Also, on July 3, US Second Circuit Judge Jose Cabranes, speaking on behalf of a three-judge panel, ruled and that the Justice Department must unseal and produce some 2000 pages of documents dealing with the Epstein NPA. It is believed the documents contain damaging information on Epstein's friends and associates, including his top aide, Ghislaine Maxwell, the daughter of the late British publisher Robert Maxwell. Robert Maxwell has been linked to Russian Jewish mob boss Semion Mogilevich, who, in turn, has been linked to Trump's real estate and casino businesses. In December 2018, Epstein concluded a last-minute deal with Bradley Edwards, a south Florida attorney representing Epstein's victims and who had been sued by Epstein. The financial out-of-court settlement resulted in Epstein's victims not having to testify in court.

Epstein victim, Giuffre, represented by David Boies, the chairman of Boies, Schiller & Flexner, has a pending lawsuit against Maxwell, claiming that Epstein's assistant turned her into a "sex slave." The suit also involves making public sealed court documents that not only implicate Maxwell in Epstein's trafficking ring but also Dershowitz and other VIPs.

The involvement of British citizen Maxwell and Prince Andrew in the Epstein matter is drawing attention to another recent story concerning top secret cables sent to London from Washington by British ambassador to the United States Kim Darroch. Among the recipients of Darroch's cables was Mark Sedwill, the British national security adviser and Cabinet Secretary. Darroch warned in one dispatch to London that, with Trump, "we could also be at the beginning of a downward spiral, rather than just a roller coaster: something could emerge that leads to disgrace and downfall."

With the FBI involved in the renewed criminal probe of Epstein that links to Maxwell and Prince Andrew, the British ambassador would have, as a matter of course, been briefed by federal authorities on prominent UK citizens being in legal extremis in the United States. In addition, one of the cooperating witnesses for Special Counsel Robert Mueller, Trump campaign interlocutor with Abu Dhabi and Saudi Arabia, George Nader, was arrested at John F. Kennedy International Airport early last month on charges of transporting child pornography into the United States from abroad. How much does George Nader know about Trump administration involvement in wider child sexual exploitation and trafficking? Time will tell but the clock has just started moving much faster.