"Be careful what you wish for, you may receive it," wrote author W.W. Jacobs in the classic horror story The Monkey's Paw in 1902.

Nearly 50 years after military conscription, or the draft, ended in the United States in 1973, we can see that that admonition is a salient one. Opponents of the draft got what they wanted when the government agreed to conscription's end, but they also got something they never bargained for: endless war. 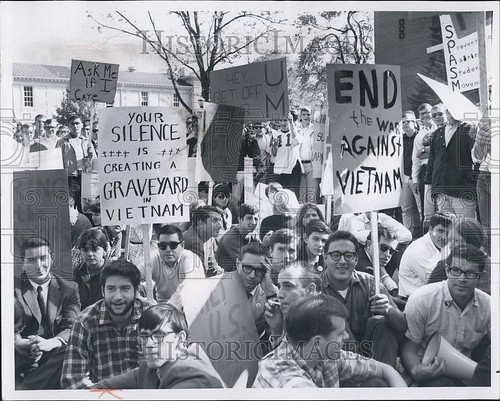 Oct. 16, 1965, news photo: antiwar and anti-protest demonstrations, together on the University of Michigan Diag.
(Image by In Memoriam: Wystan)   Details   DMCA

Anti-Vietnam War protests helped end both the war and the draft. Photo by Wystan.

European governments engaged in endless war for centuries, and they could do so because there was no draft. Soldiers were professionals, so the endless European wars affected them, their families, and their governments, but often had little effect on the general populace. A farm family in Eastern Europe might find itself in Polish territory one decade, in German territory in another, and in Austrian Empire territory in another, but unless there was a son in the military, that affected their lives very little.

In 1813, the Kingdom of Prussia introduced universal conscription; that was the first occurrence since the Roman Empire of an army comprised primarily of civilians. As Thomas Brophy of Holy Cross College writes in the Delta Epsilon Sigma Journal, "now wars became national affairs that the whole country was engaged in, rather than simply a ruler with his or her army against another ruler and their army."

Because wars became national affairs, the general populace started to have a say. Public pressure to end a war quickly to bring the conscripts home was a huge factor in the American Civil War, World War I, World War II, the Korean War, and culminating in the Vietnam War, when "bring the boys home" was a rallying cry for the war's opponents.

They not only managed to bring the boys home, but they went a step further and got the government to end the draft, which had been in force since 1948 in both peacetime and wartime.

In the world wars and Korean and Vietnam wars, everyone had a son, a brother, a cousin, or a neighbor who was fighting, so everyone had a stake in bringing that person home. The end of the draft had the unintended consequence of putting the onus of the fighting on America's brave volunteer military. While most Americans rightly respect them for their service, many do not even know anyone in the military, so bringing our soldiers and sailors home no longer seems to be a national priority. When it comes to the military, we're back to the pre-1813 European model of out of sight, out of mind.

Is a return to the draft the answer? No. The answers are more interest in covering the wars we're in by the media (when is the last time you read an article about Afghanistan or Iraq?), and more concern by the American people for our military personnel, with the resulting pressure to end these endless wars and to bring the boys, and girls, home.

"Out of sight, out of mind" is no way to oversee the government's use of the military.

William S. Bike is Senior Vice President of ANB Communications, a communications consulting and political consulting firm based in Chicago. Bike has worked in journalism, public relations, and politics since 1979 and is the former Communications (more...)
Related Topic(s): Draft; Draft - Conscription; Endless War; Protest; Soldiers; Wars, Add Tags
Add to My Group(s)
Go To Commenting
The views expressed herein are the sole responsibility of the author and do not necessarily reflect those of this website or its editors.