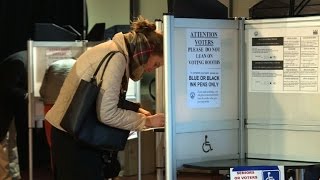 Every four years we suffer the sad ritual of begging or bashing a left third party to refrain from draining votes from the mainstream Democrats because of a horrendous Republican alternative.

And every four years the real point election theft is missed.

It's a 120-year tradition dating back to 1896, the year in which the evangelical Democrat William Jennings Bryan persuaded radical Populists to back his presidential bid. He may well have won the popular vote. But steel baron Mark Hanna (the era's Karl Rove) promised to have Bryan shot if he won, and then stole the vote count for William McKinley.

Bryan and Hanna's manipulations shattered the Populist (People's) Party. Bryan divided it by region and race, Hanna crushed it with stolen ballots. Together they weakened grassroots progressive campaigning for 12 decades to come.

As always, this election year, many on the left question how the Green Party might affect the 2020 election. Much of the debate is brilliant, and the minds behind it on all sides are the best.

But here's a simple request: How about we postpone this evergreen argument until the last week of October?

Right now, it's time to join together to prevent another election theft by protecting the voter rolls and stopping another stolen vote count.

The Transformative Justice Coalition, vote.org and rockthevote.org are among the groups we can support. Their time is now.

Because, as in 1896, in 2020 we're already drowning in real-time voter suppression. It's computerized and violent, as we've just seen in Ohio, where more than 460,000 citizens have been stripped from the voter rolls, and where corporate thugs have used physical force to assault signature gatherers working for a legitimate referendum. Add this to the scourge of a new generation of voting machines that are vulnerable to hacking, and you have the perfect mix for another poisoned election... and for an entrenched autocracy to follow.

At this time, it's helpful to look back through recent history in order to grasp the scope of election theft and how to confront it.

The corporate Democrats did win the presidency in 2000, 2004 and 2016. Each time they wal ked away without a word (except to blame the left). The Gore, Kerry and Clinton campaigns all were shafted by the GOP stripping the voter rolls and flipping electronic vote counts. But instead of fighting to change the basic nature of our electoral system, they have blamed the left and left the machinery of theft in place. So the same pattern of fraud and deceit that cost the Democrats three of the last five presidential elections could strike again in 2020.

Put simply, since the theft of Florida 2000, the Democrats have failed to protect the vote, failed to provide reliable voting machines and failed to abolish the Electoral College all of which could enthrone Donald Trump in 2020.

Those of us reporting on stripped registration rolls and flipped vote counts in Florida in 2000; Ohio in 2004; Michigan, Wisconsin and Pennsylvania in 2016; and more, have been relentlessly attacked not by the Republicans (who don't seem to care) but by the corporate Democrats and many so-called progressives.

Officially decided by 537 votes, the 2000 election in Florida was turned by Gov. Jeb Bush's stripping of more than 90,000 people allegedly with felony convictions (the vast majority of them people of color) from the voter rolls, disenfranchising them using a law from the former Confederacy. In The Best Democracy Money Can Buy, Greg Palast shows virtually none actually had felony records. (Of course, even if they had, this should not have resulted in disenfranchisement.) But Ralph Nader is still being blamed for the Democrats' defeat.