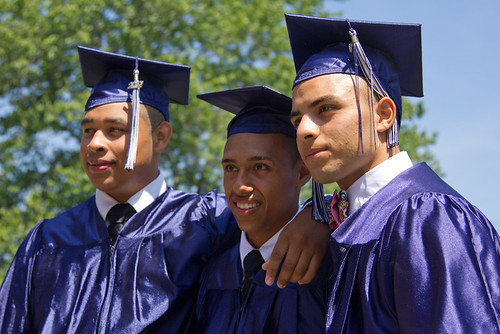 Every one from journalists to politicians hail education as the ultimate path out of poverty. The common narrative usually goes: that access to quality education is enough to allow a student to learn the skills necessary to go to a decent college or get a good job and then enter the middle or upper class. And that if we just find a way to improve our education system we would see much higher levels of economic mobility.

Despite how nice this sounds, this is far from the truth.

It goes without saying that in our current situation education as it is now, gives an unfair advantage to the wealthy because wealthy students are often afforded more resources and access to better schools than their less privileged counterparts. Most of the fervent proponents of "education as the ultimate equalizer" still seem to believe that improving the quality of public schools is enough to improve educational outcomes and increase economic mobility, which it isn't. Even if all students no matter their socioeconomic background had access to the same quality education it still wouldn't be enough to improve their academic performance significantly.

This idea seems to assume that people from all income levels have an equal opportunity of succeeding in school, which is not the case because to believe that you would have to ignore the effect a students home life has on their academic performance. Lower-income students who have to deal with a rough home-life will always have a harder time applying themselves in school than their more privileged counterparts.

According to a study done by the RAND corporation improving teacher quality within schools wasn't enough to improve educational success. The study examined the effects the Bill and Melinda Gates Foundation had on improving students educational outcomes. It found that focusing on teacher quality isn't enough to improve education results. Instead, he found that the most potent factors in enhancing student's academic performance were childhood nutrition, family support, and early childhood education.

The education is the common equalizer argument is the product of a conservative "lift yourself up by the bootstraps" mindset, that if one just works hard enough, they can ascend to the middle class or potentially become wealthy.

Not only is this idea false, but it is also especially harmful because it perpetuates the notion that if someone is in poverty, it is because they didn't "work enough."

Liberals don't usually buy into the bootstraps argument when it's used against welfare, yet for some reason, they still buy into the idea that just improving in education is enough to help students out of poverty. Instead, we should focus on improving the material conditions of all students before we focus on improving schools. After all, what is the good of just improving schools while students are to hindered by their material conditions to properly learn in them?

I am a member of the DSA-LA immigration justice committee and contribute to the code pink blog.
Related Topic(s): Education; Politicians, Add Tags
Add to My Group(s)
Go To Commenting
The views expressed herein are the sole responsibility of the author and do not necessarily reflect those of this website or its editors.

Don't Deport Immigrants Even Those That Commit Violent Crimes

Education is not the Ultimate Equalizer