Another Keep It Simple exposure of the Fantastic Freeh Fiction. This work serves as a work of FACT to discredit a work of FICTION so defamatory and libelous it should cost Freeh every penny of the 6.5 million he received for producing it.

From Page 39 of The Freeh Report

CHAPTER 2  RESPONSE OF UNIVERSITY OFFICIALS TO THE 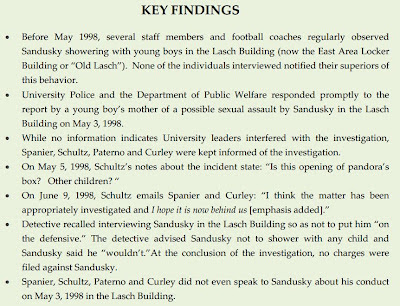 Each Statement in the KEY FINDINGS  is a misleading deception

1) Before May 1998, several staff members and football coaches regularly observed  Sandusky showering with young boys in the Lasch Building (now the East Area Locker  Building or "Old Lasch").  None of the individuals  interviewed   notified their superiors of  this behavior.

What an absurd statement: Of course they didn't notify anyone -- Sandusky brought Second Mile boys to PSU locker rooms from the very beginning before most of the staff were at PSU. They thought nothing of it. In fact they believed it to be a positive experience for the fatherless boys who needed male role models. Males of all ages have shared showers forever. What were they supposed to report Mr.Freeh?  That Jerry and his 2nd Mile kids were working out and taking showers? That is not criminal or inappropriate.

2) University Police and the Department of Public Welfare responded promptly to the report by a young boys mother of a  possible sexual assault  by Sandusky in the Lasch  Building on May 3, 1998.

Yes they responded and concluded there was no criminal or sexual behavior. The mother did not report a "possible sexual assault" She reported exactly what had happened: Her son came home with wet hair and told her he had showered with Sandusky and received a bear hug.  If that is a sexual assault why didn't DPW conclude that in their inquiry?

3) While no information indicates University leaders interfered with the investigation,  Spanier, Schultz,  Paterno  and Curley  were kept informed of the investigation,   On May 5, 1998, Schultz's notes about the incident state: -Is this opening of pandora's  box? Other children? "

Yet another totally misleading statement. Not a single shred of evidence exists that Joe Paterno was informed of DPW's inquiry  -- much less "kept informed".  This kind of gross overstatement without a shred of proof permeates the Freeh Report. How can that be?

The second email on May 13 from Curley to Schultz Subject Re:Jerry states: "Anything new in this department, coach is anxious to know". Once again no clue to which coach is the object of subject Re Jerry and no indication of the relevance of "anxious". Freeh has no evidence this referred to Joe Paterno and no evidence Joe Paterno was told anything.

How can Freeh or anyone presume that Tim Curley statements like "Coach is anxious to know" indicates Tim had anything to tell coach? Tim called Joe "JOE" as he requested everyone to do.

Graduate of the Univ of TN in Public Administration, owner of Mountain Sound Inc and Seismic Systems. Longtime blogger on politics, genealogy, loudspeaker manufacture, and Tennessee.

Related Topic(s): Freeh Report; Joe Paterno; Joe Paterno; Penn State; Penn State Football Scandal; Pennsylvania State University, Add Tags
Add to My Group(s)
Go To Commenting
The views expressed herein are the sole responsibility of the author and do not necessarily reflect those of this website or its editors.

PSU and Paterno Not Guilty - McQueary Testimony Proves It.

Each 'Key Finding" of the Freeh Report is A Misleading Deception

So You Think Joe Paterno is a Liar?