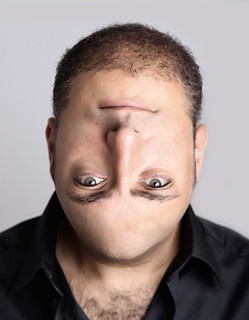 Upside yo' head
(Image by BenedictFrancis)   Details   DMCA
"You rape our women," Dylann Roof is reported to have declared just prior to shooting nine black people in a Charleston church. And in that, he showed a mentality that reflects something deep in the culture.

It's not just that the idea of the black rapist has a long and sordid history in the South. And it goes deeper than that the accusation was generally a false one.

More than that, it is a mirror image of the truth. It turns things upside down. Black is white, and white is black.

While the image of the black man raping the white woman has been a powerful and deep part of the Southern political culture, the historical reality of the problem of interracial rape was the negative of that picture: i.e., the white man raping the black woman.

DNA studies have shown that perhaps as many as 35% of African-American men carry a Y chromosome of European origin.

The problem of interracial rape has historically been the very opposite of that mythology that drove Dylann Roof's murderous passion.

When we combine the factual reality shown by the DNA evidence with the long-enduring and passionate antagonism of whites over the (mostly) imagined rape of white women by black men, we see a template of a most troublesome sort.

It is a template in which everything can be stood on its head. It is a mentality in which the opposite of the truth can become a central part of a worldview, and a major channel for passions to be expressed in the realm of power.

It represents a fractured relationship with reality. It is a sign of brokenness in people's consciousness, in their relationship with and perception of themselves. It provides a door through which a force of brokenness can wreak much damage--from the Church in Charleston, to the culture of lynching black men ostensibly to protect the purity of white women, to the systematic damage being inflicted on America in the national crisis of our times.

Because this mentality is by no means confined to the matter of interracial rape, as we can see in the destructive political force that has come to center stage of American politics.

Thus it is that in our time -- when "the spirit that drove us to Civil War" has returned to take over one of America's major political parties -- that the template of the Lie is serving a force of brokenness in several identifiable ways.

We see those who proclaim loudly that they are "conservative" systematically trampling our basic American political norms and traditions.

(Filibuster, debt ceiling, acceptance of the legitimacy of an opponent's holding power--to name a few.)

We see that those who wave the flag most prominently, and make much show of their patriotism, damaging the nation at every turn, and regularly sacrificing the nation's good for their political advantage.

(For example in the obstructionism, making it a priority to make the president fail even when the economy was on the edge of an abyss, then impeding legislation to revive the economy; sabotaging an attempt to solve the huge national problem of the health care system while offering no better alternative, all to keep the opponent from achieving anything.)

Andy Schmookler, an award-winning author, political commentator, radio talk-show host, and teacher, was the Democratic nominee for Congress from Virginia's 6th District. His new book -- written to have an impact on the central political battle of our time -- is
Related Topic(s): Christianity; Conservatism; Hate-Racism-Bigotry; Patriotism; Truth, Add Tags
Add to My Group(s)
Go To Commenting
The views expressed herein are the sole responsibility of the author and do not necessarily reflect those of this website or its editors.