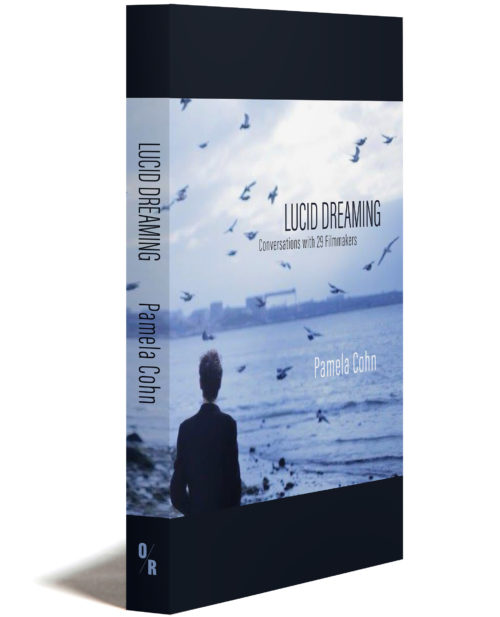 "April is the cruelest month, breeding / lilacs out of the dead land, mixing / memory and desire, stirring / dull roots with spring rain."

Lucid dreaming means to be aware that you are dreaming while doing so. Probably we've all had these kinds of dreams. Therapies have been built around lucid dreaming. Books have been written, sometimes equating it to an outer-body-experience inside the mind, and websites have popped up, including Lucidity.com. Philosophers have weighed in. As Nietzsche once said, in Human, All Too Human, "Misunderstanding of the dream. In the ages of crude primeval culture man believed that in dreams he got to know another real world; here is the origin of all metaphysics. Without the dream one would have found no occasion for a division of the world."

But that's not what Pamela Cohn's on about in Lucid Dreaming: Conversations with 29 Filmmakers. Not exactly. Cohn is more interested in a parallel hyper-seeing -- waking up into your life and using a camera to help you do it, producing a cinematic experience, and reframing your way of thinking along the way. The 29 filmmakers Cohn interviews come from all parts of the world -- Asia, Europe and the Americas -- and their filmmaking covers the usual panoply of social issues, including immigration, race, gender issues, economics, surveillance state, selfhood, and the phenomenological use of the camera. Cohn writes, "My hope is that the effect of disparate personalities gathered together in one volume evokes an expansive and global conversation, not merely a series of dialogues strung together."

The filmmakers journey away from the dulling Hollywood tropes and themes that filmmaking legend Dziga Vertov once referred to as "the new opium of the people", and venture towards uncharted territory and a new language that shows rather than tells, such as what Vertov largely achieved in Man With A Camera. And that's what Cohn sees these filmmakers doing: "Ultimately - and not to sound too precious about it - one of my overriding hopes for the compilation was that it would be a book of inspiration with a multivalent approach - for other artists, certainly, or anyone wanting to take the 'risk of blossoming'."

One illustrative example of the power to express a transformative experience by means of filmmaking may be seen in Michael Robinson's short film, The General Returns from One Place to Another. The film presents a disturbed space inhabited by dream-seeing human-oids, representative of early David Lynch films, where a unspeaking character looks almost into the lens -- as if the viewer is sensed, until an uncanny connection is made that sticks with you; pop music fading in and out, along with popping sounds (fireworks? thunder?) that elicit a wistfulness that doubles in the viewer's mind (at least mine). Here is the video:

Related Topic(s): Artistic; Interviews; People; Story; StoryTelling; Time; Video, Add Tags
Add to My Group(s)
Go To Commenting
The views expressed herein are the sole responsibility of the author and do not necessarily reflect those of this website or its editors.