The founding fathers said betraying America to foreign powers was an impeachable offense. The president must go 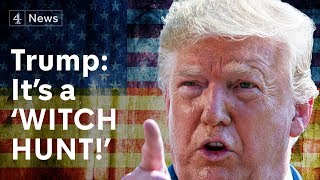 The most xenophobic and isolationist American president in modern history has been selling America to foreign powers for his own personal benefit.

Trump withdrew American troops from the Syrian-Turkish border, leaving our Kurdish allies to be slaughtered and opening the way for a resurgent Islamic State. Trump's rationale? He promised to bring our soldiers home.

There could be another reason. Trump never divested from his real estate business, and the Trump Towers Istanbul -- is the Trump Organization's first and only office and residential building in Europe. Businesses linked to the Turkish government are also major patrons of the Trump Organization. Which may be why Trump has repeatedly sided with the Turkish strongman Recep Tayyip Erdoğan, who has been intent on eliminating the Kurds.

Back home, Trump has separated families at the border, locked migrant children in cages and tried to ban Muslims from entering the country. He says he wants to protect America's borders.

But guarding America's geographic borders isn't nearly as important as guarding the integrity of American democracy, which Trump has repeatedly compromised for personal political gain. He did this on 25 July when he asked the president of Ukraine to do him a personal "favor" by digging up dirt on Joe Biden, his most likely 2020 opponent.

All of this is precisely what the founding fathers sought to prevent.

Related Topic(s): Democracy; Impeachment; Trump Mobster, Add Tags
Add to My Group(s)
Go To Commenting
The views expressed herein are the sole responsibility of the author and do not necessarily reflect those of this website or its editors.