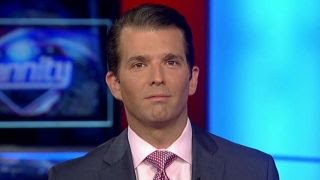 Over the weekend Donald Trump fired off a tweet that admits he's been lying to the public for months and shaves his "no collusion" argument down to a fingernail. But while Trump is unlikely to face the consequences of this admission, except as one of many contributions to proof that he has obstructed the investigation, this brief statement aims a big legal bus squarely at Donald Trump Jr.

Fake News reporting, a complete fabrication, that I am concerned about the meeting my wonderful son, Donald, had in Trump Tower. This was a meeting to get information on an opponent, totally legal and done all the time in politics - and it went nowhere. I did not know about it!

The story of the meeting between Trump's senior campaign staff and Russian operatives, a meeting both organized and attended by Trump Jr., was first made public by the New York Times on June 8, 2017. On that date, the Times asked Trump Jr. for his comments on the meeting, and he replied with a statement that during the meeting Russian attorney Natalia Veselnitskaya had "primarily discussed a program about the adoption of Russian children." The Washington Post reported on July 31, 2017, that Donald Trump actually dictated this statement while flying back from Germany on Air Force One.

Trump Jr. dutifully repeated the statement his father had provided -- though they both knew it wasn't true at the time. And if that was the end of it, Trump Jr. would be in the same position as Trump: knowingly and publicly disseminating a false story intended to halt or divert the investigation into connections between the campaign and the Russian government.

But for Trump Jr., that was not the end. He has repeated the statement in multiple forums. In particular, there was this statement:

Donald Trump Jr.: The meeting was instead primarily focused on Russian adoptions, which is exactly what I said over a year later in my statement of July 8, 2017.

That's just one part of testimony that Trump Jr. made before the US Senate on September 7, 2017. And lying in that setting is a good deal more serious.

In his Sunday tweet, what Donald Trump is calling "fake news" is multiple stories that he was sulking around whatever golf course he happened to be inhabiting at the moment, worrying that special counsel Robert Mueller has targeted his son, Donald Trump Jr. But in attempting to call that story "fake news," Trump admitted that the story he had been peddling for months -- the assertion that the meeting arranged by Trump Jr. between Russian operatives at senior members of Trump's campaign staff was about "adoption" rather than seeking Russian help in attacking Hillary Clinton -- was an out-and-out lie.

In his Senate testimony, Donald Trump Jr. gave detailed responses on how the meeting was established, who he talked to in setting it up, and the structure of that meeting. From the beginning, it's been clear that the purpose of the meeting was to attempt to get help from the Russian government against Hillary Clinton. Trump Jr.'s primary defense in this testimony is the phrase "not that I recall" which was frequently deployed.

But Trump Jr. is definite on some things:

Question: Did you inform your father about the meeting or the underlying offer prior to the meeting?

Trump jr: I did not.

Trump Jr. also denied there being a pre-meeting meeting with others in the campaign before the get together. However, on June 27, 2018, CNN reported that former Trump attorney Michael Cohen was willing to testify that Trump did know about the meeting. Not only that, but there was another section of Trump Jr.'s testimony.

Related Topic(s): Donald Trump Junior; Giuliani Rudy; Investigation; Justice; Trump Liar; Trump Russia Connection, Add Tags
Add to My Group(s)
Go To Commenting
The views expressed herein are the sole responsibility of the author and do not necessarily reflect those of this website or its editors.