Lila Garrett with Dennis Trainor, Jr in part one of Acronym TV this week.

ISIS in Iraq, Barack Obama as a War President, The U.S. Embassy in Baghdad, Litigating the past and planning for the future, The sitcom All in the Family (and what would Meathead and Archie do now?), and Satire as a tool for the peace movement 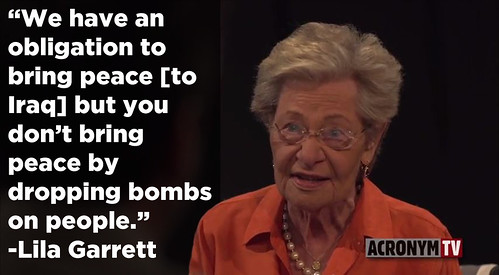 Dennis Trainor, Jr. is the creator and host of Acronym TV and the writer, director and producer of the documentary American Autumn: an Occudoc.
Related Topic(s): Domestic Security; Domestic Spying; Domestic Terrorism; Double Standards; Iran; Moral Values; Obama; Oil; Peace; Satire; (more...) Satire; Syria; Withdrawal; Withdrawal_From_Iraq, Add Tags  (less...)
Add to My Group(s)
Go To Commenting
The views expressed herein are the sole responsibility of the author and do not necessarily reflect those of this website or its editors.