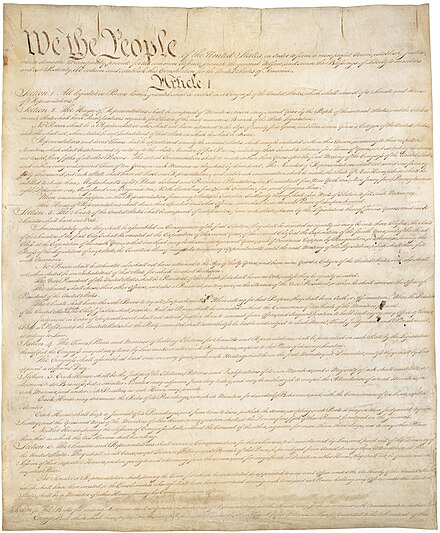 Of course we can amend our Constitution but we are all quite aware that amendments do not come easily. The process was deliberately made difficult so as to ensure that there is widespread support for any amendment. History confirms that often the process often takes many years of persistent effort.

On only brief reflection, it does seem highly unlikely that men who devoted time and great trouble to make the Constitution so very difficult to amend would have knowingly provided a way for a small number of appointed justices serving lifetime appointments to so casually make important changes to our understanding of the Constitution. This judicial blemish seems to have derived from a dubious grab for power in the the 1803 Supreme Court decision regarding the famous case, Marbury v Madison; but still, the decision stands and it likely will continue to stand.

There are arguments, of course, for judges to be appointed rather than elected. But recent history clearly illustrate that there is good reason for concern with how this now very important court comes to be populated. Of particular concern is the fact that appointments to federal courts are for a lifetime. A more rapid turnover in the membership of the Supreme Court would, especially in view of the great power the Court now holds, seem more sensible. The problems with the federal courts (and particularly with the Supreme Court) are grave and at the very least they at least deserve some thoughtful discussion. In order to stimulate thoughtful consideration and discussion of these issues, let me propose two candidate amendments to the Constitution.

Amendment A. On September 1 of every odd numbered year, the longest serving member of the Supreme Court shall retire from that position and thereafter not be eligible for future appointment to that Court.

Notice that this amounts to an eighteen year term limit so long as the Court remains at nine Justices, but in a simple manner, this wording maneuvers around the intricacies of the introduction of those term limits in the first years after the amendment is first enacted. Notice that with this system, during three presidential terms (twelve years), six new justices would be appointed, and this would break up any five-justice majority that might form before they have much time to control the decisions. Of course the specific date of September 1 is arbitrary, but a date late in the year would give some breathing room for a new president. Some adjustment to the wording could be considered to omit a forced retirement when there is a voluntary retirement or the death of a justice.

On another matter, the appointment by Obama of Neil Gorsuch shows how easily the current confirmation process can be abused by deliberate Senate inaction. This recently demonstrated corruption clearly calls out for correction, but the Senate sets its own rules, governed only by conformance with the Constitution. For that reason it does seem that actual reform will require yet another amendment to our Constitution. In this regard, I would suggest, for discussion, the following approach:

Amendment B. T he President shall nominate, and by and with the Advice and Consent of the Senate, shall appoint Ambassadors, other public Ministers and Consuls, Judges of the supreme Court. Whenever the Senate fails to reject such an appointment within ninety days of when the President first notifies the Senate of that appointment, that inaction by the Senate shall be interpreted as the Senate's endorsement of the President's appointment.

A concerned citizen and former mathematician/engineer now retired and living in rural Maine.
Related Topic(s): Constitutional Issues; Constitutional Movement; Elections; Impeachment; Judges; Reform; Trouble; Trump; Voting, Add Tags
Add to My Group(s)
Go To Commenting
The views expressed herein are the sole responsibility of the author and do not necessarily reflect those of this website or its editors.