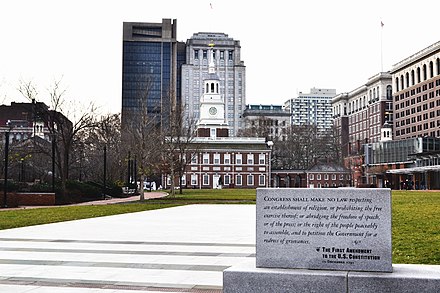 Many years ago, I was giving a lecture on the Constitution and the Bill of Rights to a class at a public high school here in Virginia. During the course of my talk, I made the following statement: "The First Amendment does not give people the right of free speech."

I asked the students whether my statement was correct or incorrect. Everyone immediately told me that I was wrong. They said the First Amendment did in fact give people the right of free speech.

I held my ground. I said it didn't, and I pressed the students to figure out why I was maintaining my position. They were just as steadfast in their position, until a girl raised her hand and said, "Mr. Hornberger is right. The First Amendment does not give people rights. It prohibits the government from infringing on rights that preexist the government."

She was absolutely right.

"Congress shall make no law respecting an establishment of religion, or prohibiting the free exercise thereof; or abridging the freedom of speech, or of the press; or the right of the people peaceably to assemble, and to petition the Government for a redress of grievances."

Notice that the Amendment does not give people rights. Instead, it prohibits Congress from enacting laws that abridge people's rights.

But what is that all about? Why did our ancestors deem it necessary to enact such a prohibition? Isn't Congress our friend? Isn't it composed of people who we elect to represent us? We often hear that we should trust the government. It doesn't sound to me that the people who enacted the First Amendment had much trust in elected representatives.

After all, the only reason for enacting such a prohibition is the concern that in the absence of such a prohibition, Congress would enact laws that abridge freedom of speech and other fundamental rights. That sounds like Americans believed that the members of Congress needed to be told that they were prohibited from doing so.

That was also why Americans opposed enormous, permanently standing military establishments. Given their conviction that the federal government would destroy their rights, they understood that the way governments historically had done that was through their military forces.

After all, how else to enforce a law, say, that prohibits people from criticizing the president or Congress? Sure, it would be possible to arrest, indict, convict, and incarcerate them but what if dissent became widespread among the citizenry? That's where a massive military establishment would come into play to use massive military force to put down dissent with round-ups, assassinations, killings, torture, executions, and other things that militaries historically have done to oppress people. That's why all totalitarian regimes have large, permanent, powerful military establishments.

Thus, there is no possibility that our American ancestors would have approved the national-security state form of governmental structure under which we live today, a structure consisting of the Pentagon, the CIA, the NSA, and a vast empire of domestic and military bases. If the Constitution had proposed that form of governmental structure, Americans would have summarily rejected the deal and simply continued operating under the Articles of Confederation, another type of governmental system, one in which the federal government's powers were so weak that the federal government wasn't even given the power to tax.

The Constitution called into existence a limited-government republic, a type of governmental system that gave the federal government very few powers. There was an army, but it was relatively small -- large enough to defeat Native American tribes but not large enough to threaten the American people with massive tyranny.

Related Topic(s): First Amendment; Government; Rights; Speech, Add Tags
Add to My Group(s)
Go To Commenting
The views expressed herein are the sole responsibility of the author and do not necessarily reflect those of this website or its editors.