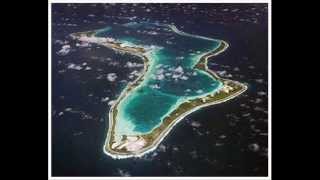 The recent decision by the Hague-based International Court of Justice that the Chagos Islands -- with its huge US military base at Diego Garcia -- are being illegally occupied by the United Kingdom (UK) has the potential to upend the strategic plans of a dozen regional capitals, ranging from Beijing to Riyadh.

For a tiny speck of land measuring only 38 miles in length, Diego Garcia casts a long shadow. Sometimes called Washington's "unsinkable aircraft carrier," planes and warships based on the island played an essential role in the first and second Gulf wars, the invasion of Afghanistan and the war in Libya. Its strategic location between Africa and Indonesia and 1,000 miles south of India, gives the US access to the Middle East, Central and South Asia and the vast Indian Ocean. No oil tanker, no warship, no aircraft can move without its knowledge.

Most Americans have never heard of Diego Garcia for a good reason: no journalist has been allowed there for more than 30 years and the Pentagon keeps the base wrapped in a cocoon of national security. Indeed, the UK leased the base to the Americans in 1966 without informing either the British Parliament or the US Congress.

The Feb. 25 Court decision has put a dent in all that by deciding that Great Britain violated United Nations Resolution 1514 prohibiting the division of colonies before independence. The UK broke the Chagos Islands off from Mauritius, a former colony on the southeast coast of Africa that Britain decolonized in 1968. At the time, Mauritius objected, reluctantly agreeing only after Britain threatened to withdraw its offer of independence.

The Court ruled 13-1 that the UK had engaged in a "wrongful act" and must decolonize the Chagos "as rapidly as possible."

While the ruling is only "advisory," it comes at a time when the US and its allies are confronting or sanctioning countries for supposedly illegal occupations -- Russia in the Crimea and China in the South China Sea.

The suit was brought by Mauritius and some of the 1,500 Chagos islanders, who were forcibly removed from the archipelago in 1973. The Americans, calling it "sanitizing" the islands, moved the Chogossians more than 1,000 miles to Mauritius and the Seychelles, where they have languished in poverty ever since.

Conn M. Hallinan is a columnist for Foreign Policy In Focus, â€œA Think Tank Without Walls, and an independent journalist. He holds a PhD in Anthropology from the University of California, Berkeley. He (more...)
Related Topic(s): Allies; Carrier; Diego Garcia; Occupation; Pentagon, Add Tags
Add to My Group(s)
Go To Commenting
The views expressed herein are the sole responsibility of the author and do not necessarily reflect those of this website or its editors.