Where did COVID Come From?
Part 1

We rely on the scientific community as a context for almost every public policy decision. People who want to influence policy know this, and they don't just lobby Congress, they also buy scientists, scientific reporting, and placement in prominent journals. Most scientists are honest, but they have to survive in a world where funding is tighter than it should be. It's not surprising that some of them succumb and publish what powerful and corrupt institutions want them to.

The question of a laboratory origin for COVID is politically explosive, so we expect a heavy hand restraining the science establishment. Those of us seeking an honest answer, who have a little expertise, a little horse sense, and a lot of patience, are left to sift through information, misinformation, and disinformation in a politicized environment.

My personal opinion is that I don't like having to wonder if global pandemics have been created, accidentally or otherwise, by my own government. Bioweapon research is extensive in several countries, but dominated by the US. The disclosed US budget is over $10 billion per year, and who knows what the black budget is. There is no legitimate purpose for this "research", and it is illegal. No bioweapon can ever attack "enemies" without unacceptable risk of infecting "friends". Over time, it is virtually certain that there will be leaks with horrific consequence. Lyme disease is a case in point.

Regardless of whether COVID19 came from a lab, we the people must demand disclosure of this secret "research", and demand an end to the American bioweapons program in its entirety.

I know of no coalition organized to this end. We'll have to start one.

Two useful books to get into this subject:
Bitten: The secret history of Lyme disease and biological weapons
Poisoner in Chief: Sidney Gottlieb and the CIA Search for Mind Control

And here's an interview by Dr Francis Boyle describing the big picture. Boyle is a professor of international law at University of Illinois with a history in both government and academia working on the limitation of biological weapons. In this interview he says:

Whoever knowingly develops, produces, stockpiles, transfers, acquires, retains, or possesses any biological agent, toxin, or delivery system for use as a weapon, or knowingly assists a foreign state or any organization to do so, shall be fined under this title or imprisoned for life or any term of years, or both.
-- The Bioweapons Anti-Terrorism Act of 1989, authored and promoted by Prof Francis Boyle

Where did COVID come from?

I don't pretend to know the answer, and based on publicly-available information, I don't think it is knowable. But there is a coherent story that can be pieced together, and I am writing this mini-series because I have not before seen all these pieces in one place. There is good evidence that the SARS-CoV2 virus originated in the United States, and suggestive evidence that it came from a bioweapons lab. In Part I, I'll cover genetic evidence. Give me another day or two to digest material about evolutionary and other evidence that COVID emerged in the US before China.

The official story is that the origin of the epidemic was the "wet market" where meat and some wild livestock is sold to consumers in Wuhan. This hypothesis was challenged by an article in Lancet, summarized here in Science Magazine. The authors interviewed the first 41 known patients in Wuhan, who were assumed to have contracted COVID concurrently from "patient zero". For 28 of them, there were links to the Market, either personal or through a family member, but for 13 of them, no links to the Market could be identified. In this neighborhood of Wuhan, most people did shop at the Market, so the authors were more impressed with the 13 who had no link, and suggested that 28 out of 41 could have been consistent with a random sample of people from that neighborhood.

Other sources claim that all 41 had links to the nearby Oriental Hotel, a short walk from the Market, and that Patient Zero was an American soldier/cyclist named Maatja Benassi...but this takes us ahead of our story.

Is it plausible that the SARS-CoV2 mutated directly from a virus that infected local bats? For this question, I am dependent on evolutionary geneticists for an opinion, and there is a divergence of opinion on the scientific literature. Geneticists who say evidence points to a laboratory origin are typically cautious, but they make these points:

The claim that the four insertions look suspiciously like HIV is shaky, but the fact that there are four gain-of-function changes from the bat virus remains unexplained.

The SARS-CoV2 genome contains a short sequence that was identified by James Lyons-Weiler in January as part of an artificial system called pShuttle SN, used in laboratory experiments to transfer genetic material. The claim was rebutted by Chinese scientists here. The rebuttal paper claims that the part of the pShuttle gene found in the new Coronavirus is actually the natural part, not the man-made part. Dr Lyons has withdrawn the claim in light of this new evidence.

Against these detailed and cautiously-worded analyses, there is one prominent article in Nature Medicine that claims to "irrefutably" rule out a laboratory origin. Their basis for saying this is

(The pangolin is a rare, endangered species of armored anteater. It looks a bit like an armadillo.) 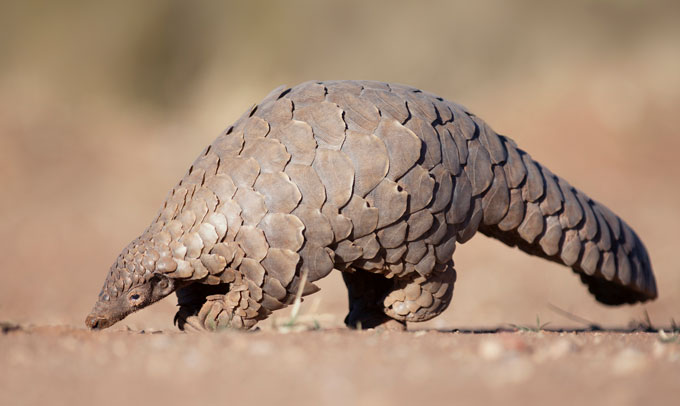 Is this the source of the virus that has turned the world on its head?
(Image by Sccience News)   Details   DMCA
But

I'm always suspicious when scientists use words like "irrefutably" and "definitive". But, more objectively, I would point out that none of the four bullet points above were refuted or even considered in the Nature Medicine paper.

There is also a statement in Lancet signed by 27 researchers which was prominently echoed in Science Magazine that "strongly condemns rumors and conspiracy theories", without refuting any of the geneticists' claims. They cite dozens of papers that they say support a natural origin, but, reviewing these papers, I find that they rather assume a natural origin. In fact several of the papers note difficulties with this hypothesis.

My personal perspective inclines me to think the Lancet statement is politically motivated. I find it suspicious that prominent scientific publications have seen fit to deny claims that COVID had a laboratory origin, but none have refuted the considered details of those claims.

The US Military has been studying Coronaviruses as bioweapons

It is undisputed that the US has an extensive bioweapons "research" program, and that modifying Coronaviruses to make them more dangerous is part of their program of work.

Here is the first person testimony of Judy Mikovits, who claims she worked in the 1990s at Ft Detrick, an Army biology lab in Maryland. Part of her job was to weaponize coronaviruses. This work was ongoing and controversial as late as 2015. President Obama approved and extended the programs. Three years ago, Nature reported that "the SARS virus has escaped from high level containment facilities in Beijing multiple times". Only in China? Also in 2017, the House Committee on Energy and Commerce requested from CDC information about leaks from similar research facilities in the US, and they got back a 503-page document with all specifics redacted.

I find it suspicious that the debate over whether COVID came from a laboratory is being avoided with ad hominem attacks, blanket denials, and straw man arguments. I'm impressed that the people who are supporting a laboratory origin have promptly corrected their misstatements, while I see no such willingness on the other side.

The totality of evidence for the hypothesis is not conclusive. The most compelling evidence I see is

In Part 2, I hope to tell the story of how an American bioweapon might have emerged in central China.

STAY IN THE KNOW
If you've enjoyed this, sign up for our daily or weekly newsletter to get lots of great progressive content.
Series: "Origin of COVID"