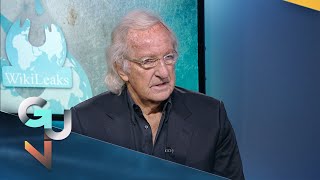 The worst moment was one of a number of "worst" moments. I have sat in many courtrooms and seen judges abuse their positions. This judge, Vanessa Baraitser -- actually she isn't a judge at all; she's a magistrate -- shocked all of us who were there.

Her face was a progression of sneers and imperious indifference; she addressed Julian with an arrogance that reminded me of a magistrate presiding over apartheid South Africa's Race Classification Board. When Julian struggled to speak, he couldn't get words out, even stumbling over his name and date of birth.

When he spoke truth and when his barrister spoke, Baraister contrived boredom; when the prosecuting barrister spoke, she was attentive. She had nothing to do; it was demonstrably preordained. In the table in front of us were a handful of American officials, whose directions to the prosecutor were carried by his junior; back and forth this young woman went, delivering instructions.

The judge watched this outrage without a comment. It reminded me of a newsreel of a show trial in Stalin's Moscow; the difference was that Soviet show trials were broadcast. Here, the state broadcaster, the BBC, blacked it out, as did the other mainstream channels.

Having ignored Julian's barrister's factual description of how the CIA had run a Spanish security firm that spied on him in the Ecuadorean embassy, she didn't yawn, but her disinterest was as expressive. She then denied Julian's lawyers any more time to prepare their case even though their client was prevented in prison from receiving legal documents and other tools with which to defend himself.

Her knee in the groin was to announce that the next court hearing would be at remote Woolwich, which adjoins Belmarsh prison and has few seats for the public. This will ensure isolation and be as close to a secret trial as it's possible to get. Did this happen in the home of the Magna Carta? Yes, but who knew?

Julian's case is often compared with Dreyfus; but historically it's far more important. No one doubts not his enemies on The New York Times, not the Murdoch press in Australia that if he is extradited to the United States and the inevitable supermax, journalism will be incarcerated, too.

Who will then dare to expose anything of importance, let alone the high crimes of the West? Who will dare publish "Collateral Murder"? Who will dare tell the public that democracy, such as it is, has been subverted by a corporate authoritarianism from which fascism draws its strength.

Once there were spaces, gaps, boltholes, in mainstream journalism in which mavericks, who are the best journalists, could work. These are long closed now. The hope is the samizdat on the internet, where fine disobedient journalism is still practiced. The greater hope is that a judge or even judges in Britain's court of appeal, the High Court, will rediscover justice and set him free. In the meantime, it's our responsibility to fight in ways we know but which now require more than a modicum of Assange courage.

John Pilger grew up in Sydney, Australia. He has been a war correspondent, author and documentary film-maker. He is one of only two to win British journalism's highest award twice, for his work all over the world. On 1 November, he was awarded (more...)
Related Topic(s): Arrogance; Assange; Judges; Magna Carta, Add Tags
Add to My Group(s)
Go To Commenting
The views expressed herein are the sole responsibility of the author and do not necessarily reflect those of this website or its editors.