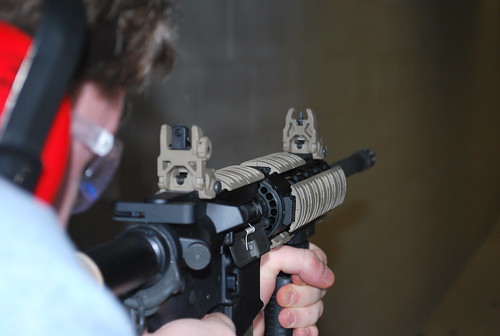 How do we defeat the scourge of gun violence in the age of Donald Trump? Well, it's not only the age of Donald Trump, but the age, finally of Me Too and the enormous and growing outpouring of information and action against sexual abuse! It appears to be an age of change and in the aftermath of yet another extraordinary gun tragedy it is our responsibility as Americans to overcome everything that stands in the way of stopping gun violence and to do so by reframing both the problem and its answer.

Those students from Marjorie Stoneman Douglas High School in Florida, the survivors and their parents and teachers bring new energy to the issue. Many have already traveled to Tallahassee to speak to legislators and have been interviewed on TV. They are building a new group led by young people scheduled to March for Our Lives in Washington on March 24th with financial and organizational support from a group of famous Hollywood people led by George Clooney and his wife Amal and Steven Spielberg, Oprah Winfrey and Jeffrey Katzenberg. It is catching fire in schools across our Country and with legislators on all sides of the issue as well as President Trump.

Things are happening and more is to come. But I'm afraid that unless we go bigger and deeper we will not overcome all the hurdles that block real change in our schools, at local, state and federal levels, in our relationship to gun violence and real violence prevention, through our courts, all the way up to the Supreme Court, in our health system treating mental health instead of using it as a fall guy, doing the scientific research to really nail down the facts and in our communities where gun owners and all the rest of us have to come together beyond fear mongering to resolve these and additional issues so we can live in safety. It's a BIG Ask!

Where to begin? We have a history marked with deaths and near deaths that we must learn from beginning long before President Ronald Reagan was shot along with his Press Secretary James Brady and two others. Brady, the Republican "Bear" and his wife Sarah led a national movement for gun control that finally was translated into law some 12 years latter in 1993 as President Bill Clinton signed the Brady Bill. The Bill required federal background checks for handgun purchases. That is where the law gets murky: The Background check goes through the National Instant Criminal Background Check System, (NICS), maintained by the FBI. There are exceptions at the state and federal levels and the National Rifle Association backed challenges to the legality of the Brady Bill in a number of state courts leading to a Supreme Court decision in 1998 in Printz v United States that ruled that the provision of the Brady Act that compelled state and local law enforcement officials to perform the background checks was unconstitutional . However it ruled that states could choose to continue conducting background checks and most have. From the inception of the NICS system in 1998 through 2014, more than 202 million Brady background checks have been conducted. During this period approximately 1.2 million attempted firearm purchases were blocked by the Brady background check system, or about 0.6 percent. The most common reason for denials is previous felony convictions. See Brady Handgun Violence Prevention Act

It is easy to get lost in the weeds or to launch a battle against the NRA which supports freedom of gun ownership based on their reading and fundamental belief in the importance of the Second Amendment. The organization represents some 4 million gun owners which is a small but vocal subset of the 75 million Americans who own guns. I believe we have larger issues and should appeal to gun owners and all of us who don't own guns as one constituency. We have to bring them into the discussion and not let the lobby or other like lobbies determine the policy of all gun owners. We have to talk to the NRA too. They will spend serious dollars to overcome this most recent threat to their absolute hegemony on this issue. Even the NRA is not of one mind on the issue of violence preventionin the aftermath of the slaughter that took place in Parkland with one AR-15 rifle.

The issue is big enough to capture the attention of President Trump who held a Listening Session at the White House with survivors and family members of the Parkland massacre and the one at Sandy Hook Elementary School and Columbine and more. The words were raw and riveting as was the answer of the President who announced his support for arming teachers to be good guys with guns to defeat the bad guys with guns in schools and churches and movie theatres and so horribly unfortunate almost countless other public spaces. It is an open threat that we must all acknowledge and begin to build a new operational infrastructure to combat violence while limiting access to weapons that can only be used to destroy multiple lives.

There was an Assault Weapons Ban signed into law by Bill Clinton on September 13, 1994 following a 52 to 48 Senate vote. The law; a ten year ban which expired in 2004 officially, the Public Safety and Recreational Firearms Use Protection Act included a prohibition on the manufacture for civilian use of certain semi-automatic firearms it defined as assault weapons, as well as certain ammunition magazines it defined as "large capacity".

After the mass murder in Las Vegas Senator Feinstein led a group of Democratic Senators proposing the Assault Weapons Ban of 2017 which bans the sale of 205 military style assault weapons by name while exempting by name more than 2,200 guns for hunting, household defense or recreational purposes. There are no Republican co-sponsors of this legislation so it has no chance of passage. It is time for Democrats and Republicans to put Party second to Country, to find the ability to look at the level of gun violence in America and come together to sponsor and enact the legislation that is necessary to stop the slaughter, harden our public spaces and provide our leaders with the information necessary to make it safer in towns and cities across our entire country. Violence Prevention must replace Gun Control as the catchwords for a 21st century revolution bringing together all Americans to defeat gun violence.

Related Topic(s): Coalitions; Gun Violence, Add Tags
Add to My Group(s)
Go To Commenting
The views expressed herein are the sole responsibility of the author and do not necessarily reflect those of this website or its editors.