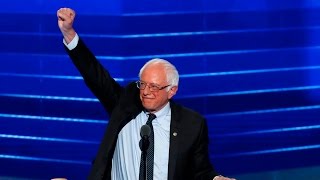 As a result of the recent midterm elections, Democrats flipped nearly 40 congressional seats and will control the House of Representatives. Impressively, nearly 6 million more Americans voted for a Democrat to represent them in the House than who did for a Republican. Further, Democrats took over seven governor's seats and won hundreds of legislative races in statehouses across the country. To a significant degree, the American people rejected President Trump's agenda benefiting the wealthy and the powerful, as well as his racism, sexism, homophobia, xenophobia and religious bigotry.

But let me be clear: It is not good enough for Democrats to just be the anti-Trump party. If they want to keep and expand their majority in the House, take back the Senate and win the White House, Democrats must show the American people that they will aggressively stand up and fight for the working families of this country -- black, white, Latino, Asian American or Native American, men and women, gay or straight.

This means addressing the crisis of a broken criminal-justice system and reforming inhumane immigration policies. But it also means fighting to expand a middle class that has been disappearing for more than 40 years, reducing inequality in both income and wealth -- which has disproportionately hurt African Americans and Hispanics -- and aggressively combating climate change, the most urgent threat facing our planet.

Twenty-three years ago, after the Republicans took control of Congress for the first time in four decades, House Republicans led by Speaker Newt Gingrich (Ga.) passed a series of bills through the House that had been on their wish list for years. Their guide was the so-called Contract with America, a radical right-wing agenda full of tax breaks for the wealthy, massive cuts to programs vital to working families, and racist and cruel bills to "reform" welfare and our criminal-justice system.

While I strongly disagree with Gingrich on virtually every issue, the House Democratic leadership should take a page from his playbook by passing a bold agenda through the House. Starting on the first day of the new Congress, the Democratic leadership in the House, supported by their colleagues in the Senate, should be just as bold in passing an agenda that reflects the needs of working Americans -- centered on economic, political, social, racial and environmental justice.

Specifically, during the first 100 days, Congress must pass a legislative agenda that includes:

Increasing the minimum wage to $15 an hour and indexing it to median wage growth thereafter. The current federal minimum wage of $7.25 an hour is a starvation wage that must be increased to a living wage -- at least $15 an hour. This would give more than 40 million Americans a raise and would generate more than $100 billion in higher wages throughout the country.

A path toward Medicare-for-all. The Medicare-for-all bill widely supported in the Senate has a four-year phase-in period on the way to guaranteeing health care for every man, woman and child. Over the first year, it would lower the Medicare eligibility age from 65 to 55, cover dental, hearing and vision care for seniors, provide health care to every young person in the United States and lower the cost of prescription drugs.

Bold action to combat climate change. The report from the Intergovernmental Panel on Climate Change has made it clear we have just 12 years to substantially cut the amount of carbon in our atmosphere, or our planet will suffer irreversible damage. Congress must pass legislation that shifts our energy system away from fossil fuels and toward energy efficiency and renewable energy. We can lead the planet in combating climate change and, in the process, create millions of good paying jobs.

Fixing our broken criminal-justice system. We must end the absurdity of the United States having more people in jail than any other country on Earth. We must invest in jobs and education for our young people, not more jails and incarceration.

Progressive tax reform. At a time of massive and growing inequality in both income and wealth, Congress must pass legislation which requires wealthy people and large corporations to begin paying their fair share of taxes. It is unacceptable that there are large, extremely profitable corporations in this country that do not pay a nickel in federal income taxes.

A $1 trillion infrastructure plan. Every day, Americans drive to work on potholed roads and crumbling bridges, and ride in overcrowded buses and subways. Children struggle to concentrate in overcrowded classrooms. Workers are unable to find affordable housing. The structures that most Americans don't see are also in disrepair -- from spotty broadband and an outdated electric grid, to toxic drinking water and dilapidated levees and dams. Congress should pass a $1 trillion infrastructure plan to address these needs while creating up to 15 million good-paying jobs in the process.

Related Topic(s): Agenda; Democrats; Education; Health; Infrastructure; Medicare; Medicine; Reform; Workers, Add Tags
Add to My Group(s)
Go To Commenting
The views expressed herein are the sole responsibility of the author and do not necessarily reflect those of this website or its editors.