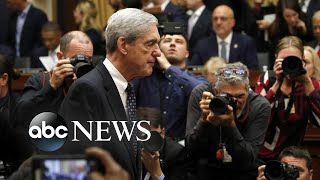 Former Russia-gate special counsel Robert Mueller's appearance before the Democratic-controlled House Judiciary and Intelligence Committees on Wednesday was an exercise by the Democrats of trying to extract statements that would keep Russia-gate alive and an attempt by the Republicans to finish off the story once and for all.

Appearing to be feigning, or actually suffering early signs of senility, the nearly 75-year old Mueller disappointed both parties and the public. He declined to answer 198 questions, according to a count by NBC News. When he did answer he was often barely intelligible and mostly stuck to what was in his final report, though he often had to fumble through pages to find passages he could not recall, eating into committee members' five-minute time limit.

Mueller especially refused to comment on the process of his investigation, such as who he did or did not interview, what countries his investigators visited and he even dodged discussing some relevant points of law. It was an abdication of his responsibility to U.S. taxpayers who footed his roughly $30-million, 22-month probe.

But when it came to making political statements, the former FBI director suddenly rediscovered his mental acuity. He went way beyond his report to say, without prosecutorial evidence, that he agreed with the assessment of then CIA Director Mike Pompeo that WikiLeaks is a "non-state, hostile intelligence agency."

Mueller called "illegal" WikiLeak's obtaining the Podesta and DNC emails, an act of journalism. In the 2016 election, the Espionage Act would not apply as the DNC and Podesta emails were not classified. Nor has WikiLeaks been accused by anyone of stealing the emails. And yet the foremost law enforcement figure in the U.S. accused WikiLeaks of breaking the law merely for publishing.

Though Mueller's report makes no mention of The Guardian's tale that former Trump campaign manager Paul Manafort visited WikiLeaks publisher Julian Assange in the Ecuadorian embassy, when questioned on this, Mueller refused to refute the story, for which there isn't a scrap of evidence. That was another purely political and not legal intervention from the lawman.

Mueller: Came to when he wanted to make a political point.
(Image by (C-Span screenshot))   Details   DMCA

While Mueller concluded there was no evidence of a conspiracy between Russia and the Trump campaign to throw the 2016 election, he has not let up on the most politicized part of his message: that Russia interfered "massively" in "our democracy" and is still doing it. There was no waffling from Mueller when it came to this question.

He bases this on his indictment of 12 GRU Russian military intelligence agents whom he alleges hacked the DNC emails and transmitted them to WikiLeaks. Mueller knows those agents will never be arrested and brought to a courtroom to have his charges tested. In that sense the indictment was less a legal than a political document.

Among the inaccuracies about Russia-gate that were recycled at the hearing is that the St. Petersburg-based Internet Research Agency spent $1.25 million in the United States to influence the election. That figure belonged to a unit that acted worldwide, not just in the U.S., according to Mueller's indictment. In fact it only spent $100,000 on Facebook ads, half coming after the election, and as even Mueller pointed out, some were anti-Trump.

Cambridge Analytica, by contrast, had 5,000 data points on 240 million Americans, some of it bought from Facebook, that gave an enormous advantage for targeted ads to the Trump campaign. It paid at least $5.9 million to the company co-founded by Trump's campaign strategist Steve Bannon. But we are supposed to believe that a comparatively paltry number of social media messages from the IRA threw the election.

Mueller implied in his testimony that there was a link between the IRA and the Russian government despite an order from a judge for him to stop making that connection. In focusing again on Russia, no member of Congress from either party raised the content of the leaked emails.

Related Topic(s): Assange; Democrats; Email; Hearings; Mueller Investigation; Mueller Report; Questions; Russia-gate; Wikileaks, Add Tags
Add to My Group(s)
Go To Commenting
The views expressed herein are the sole responsibility of the author and do not necessarily reflect those of this website or its editors.