The piece that follows reflects a rather novel, creative (and lazy) approach to writing political articles, or at least to writing them quickly. Its main substance--its "centerpiece"--consists of two e-mails I sent on consecutive days this week to a longtime friend, a retired philosophy professor who (along with his wife) finds himself on the opposite side of the Trump "Great Divide". 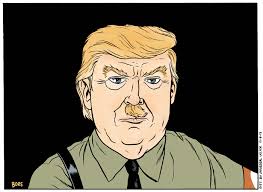 Trump as the (More-Selfish) Hitler
(Image by foreignpolicy.com)   Details   DMCA

In justification for my "labor-saving" approach, I offer two reasons. First off, my e-mails are often (as here) part of discussions with highly intelligent friends and opinion leaders whose able minds I'm attempting to persuade. As a result, I sometimes (as here, I hope) rise to a pitch of impassioned eloquence and solid argument equal to any passage in my published articles.

Secondly, the two e-mails included here--above all, the first one's threat to rupture with old friends over Trump--serve as passionate documentation of our "interesting times" (reference to the purported Chinese curse fully intended). If civilization survives its current crisis--a humongous "if"--the included e-mails may have considerable interest for future historians. Or, perhaps they'll have value for space alien anthropologists poring over the cultural remains of a long-vanished terrestrial species.

My friend and his wife, here referred to as the fictitious couple Bryce and Chloe, are two longtime friends, retired philosophy professors, both over a decade older than myself. I met Bryce as an undergraduate and, besides becoming a friend, he served as an important mentor to me. As a wide-ranging humanities scholar with numerous published philosophy books, he gave young, depressive me much-needed confidence in my abilities as a poet, essayist, and intellectual generally. That's the "debt of gratitude" I refer to in my second e-mail.

Life has led Bryce, his wife Chloe, and me down wildly unexpected rabbit holes. Both are converts to Roman Catholicism, a faith I'd overdosed on in youth and have now abandoned for honest agnosticism. But considerably weirder are our political rabbit holes. Apolitical well into my late forties, the Iraq War followed by head-on confrontation with Pennsylvania fracking morphed me into a bitter progressive opponent of our damnable duopoly--and thus co-founder of the Bernie or Bust movement. But now--while more disgusted with Democrats than ever--I'm convinced (as dangerously few leftists are) that the fate of civilization itself may depend on defeating Trump. Staunch opposition to abortion (among other things) has transformed once-progressive Catholic intellectuals Bryce and Chloe into virtual apologists for that corrupt, unspeakably dangerous, reactionary, know-nothing demagogue.

As virtual Trump apologist, Bryce has taken the more open, aggressive role. Perhaps the weirdest of his personal rabbit holes is that turf battles between science and philosophy/religion--the legitimate fear of science being perverted into overreaching scientism--has warped him into a de facto (if often tacit, perhaps even unconscious) science denier. Starting with his own misguided denial of climate science (if they can't predict weather, how can they predict something bigger like climate?), Bryce has now assembled an e-mail list in which he daily harangues old friends and colleagues about the creeping fascism in science-based attempts to limit the spread of a deadly virus.

To me, the looming fascist threat is predominantly, as it was with the Nazis, on the science-hating, truth-denying side. Bryce had declared that Trump is not a principle of metaphysical evil; to me he virtually is. If decent people have legitimate grounds to loathe Democrats, it's because their shallow, corrupt, self-serving "Resistance" has sabotaged our ability--and need--to HATE Trump with proper, rationally based hatred. More on this after the e-mails.

I seriously disagree. My intuition tells me Trump virtually IS a principle of metaphysical evil. Maybe it's safer to say that, due not merely to his loathsome-but-insubstantial self but to circumstances, he's a threat to humanity of world-historical proportions. Since part of my evidence is based on consensus climate science--which you (unlike Pope Francis) reject on no good grounds--you're utterly incapable of seeing it. Noam Chomsky, who despite having had relatives die in the Holocaust, calls today's Republican Party "the most dangerous organization in human history," is, to my perception, one of the few political analysts who gets this right.

I personally feel like Cassandra (or like Winston Churchill), feeling morally obligated to warn of a danger that few on the left, right, or center see. If Trump is reelected, he is certain to ramp up drilling for "freedom fuels", which will put him on an ever-more-violent collision course with peaceful, heroic climate activists fighting to save human civilization. I have no idea whether I'll have the moral and physical courage to join them in peaceful civil disobedience, since I understand the grave danger of "Trump Unbound" far better than they.

In all of this, Democrats have been utterly disgusting, demonizing Trump for shallow, self-serving reasons rather than the things that actually make him a demon. Another public intellectual I deeply admire, Chris Hedges, brilliantly predicted the rise of someone like Trump in his book The Death of the Liberal Class. His comparison of today's warmongering neoliberal Democrats to the Weimar liberals who, by throwing the poor and working class under the bus, paved the way for Hitler, couldn't be more apt. As to Trump's purported defense of "religious freedom", it has essentially been a defense of his "useful idiots" on the Christian right--whom Hedges rightly regards as Christian heretics.

Sadly, I strongly suspect your (and Chloe's) roles as apologists for Trump is going to end our long friendship. But that is exactly what political leaders of world-historical evil do.

Bob Dylan won a Nobel Prize for Literature for writing lines (in "All Along the Watchtower") like "Let us not talk falsely now/The hour is getting late." Weird as such apocalyptic sentiments may sound in an e-mail, that is EXACTLY what I'm doing here.

Related Topic(s): Civilization; Climate; Dangerous; Democrats; Democrats In Name Only Dinos; Democrats Progressive; Demonizing; Fascist; Hatred; Hitler; (more...) Liberals; Philosophy; Resistance; Trump; Trump Against Climate Change; Trump Apologists; Trump Ego, Add Tags  (less...)
Add to My Group(s)
Go To Commenting
The views expressed herein are the sole responsibility of the author and do not necessarily reflect those of this website or its editors.