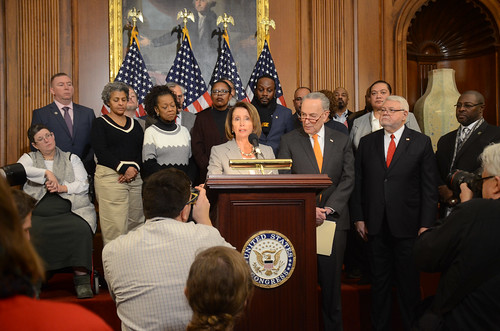 The DNC Leadership and the leaders of centrist organizations raising an hysterical fuss about Bernie Sanders current and imminent lead in the Democratic party is not, mostly about politics or electability. I don't believe that. There may be a few centrist House members in Trump red districts who are at risk, but overall, I believe that Bernie Sanders at the head of the ticket will HELP elect down-ticket candidates and HELP take back the Senate and strengthen the Democratic domination of the house, as well as help down ticket state and local level candidates.

The real reason there is a panic is because there are a lot of powerful influencers who will not be so powerful or influential after Bernie is elected. Once Bernie is elected and becomes head of the Democratic party-- a thought that makes many insiders' heads explode, one of the first things he will do is to get rid of Superdelegates and do all he can to influence who wields power in the party. It will not be a cakewalk. He will be butting heads with Centrists like Nancy Pelosi, Stenny Hoyer and Chuck Schumer. But I am certain he'll do all he can to purge the people who gave us Superdelegates, opposition to medicare for all and the idea that Hillary or Joe Biden could be winning candidates. I'm sure he will purge the DNC and the Democratic leadership of lobbyists and do all he can to influence the elections, at the state level, of party leaders.

I really believe that the current party leadership would enthusiastically steal the election from Bernie, outraging tens of millions of voters, in order to protect their "deck chairs on the Titanic." The NYTimes has already reported that 93 superdelegates they contacted would do damage to the party in order to stop Bernie. I think I've described the real reason why. They want to protect the influence and power that Bernie seriously threatens.

Related Topic(s): DNC Chairman; Democrats DNC; Dnc Convention; Dnc Corruption; Leadership- Leaders; Sanders-Bernard; Super Delegates; Superdelegate, Add Tags
Add to My Group(s)
Go To Commenting
The views expressed herein are the sole responsibility of the author and do not necessarily reflect those of this website or its editors.