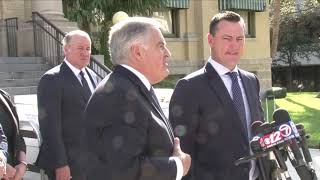 WEST PALM BEACH, Fla.--Nearly a decade of vexatious civil litigation in Palm Beach County court between convicted underage sex molester Jeffrey Epstein and Fort Lauderdale trial attorney, Bradley Edwards, who represented pro bono many of Epstein's victims, concluded rapidly on December 4 after Edwards's attorney, Jack Scarola, announced an out-of-court settlement between Epstein and Edwards. Under the terms of the agreement, termed a "surrender" by Epstein, a confidential financial settlement was reached in favor of Edwards and an apology by Epstein to Edwards for wrongly suing him in an effort to "damage his reputation" and divert attention from Epstein's victims. The Epstein suit was designed to force Edwards to abandon Epstein's victims, including Courtney Wild, formerly known only as "Jane Doe 1," who was recently identified in a three-part series on the Epstein case in The Miami Herald.

In 2007, Epstein struck an agreement with the U.S. Attorney for South Florida, Alex Acosta, and the state of Florida that saw Epstein plead guilty to two counts of engaging in prostitution with a minor female in return for a federal Non-Prosecution Agreement (NPA). The NPA meant that neither Epstein nor any of his named and unnamed co-conspirators could ever be prosecuted by the federal government or Florida for any crimes involving trafficking in underage females for sexual purposes. Ironically, Acosta now serves as Donald Trump's Labor Secretary and is responsible for enforcing federal laws against human trafficking.

The announcement of the deal was made just prior to jury selection in the civil case brought by Edwards against Epstein. Scarola, in his announcement of the deal, pointed out that the settlement was "not a compromise with Epstein" on matters relating to a separate civil action being brought by Edwards in federal court about the propriety of the NPA under the Crime Victims' Rights Act (CVRA). The CVRA is designed to allow victims of criminal acts, such as the women assaulted by Epstein when they were between 12 and 16 years of age, to have input on plea agreements and sentences. The generous terms of the NPA in the case of Epstein were kept secret by Acosta from the victims. WMR can also report that the incoming Democratic-controlled House of Representatives oversight committees of Justice and Labor intend to investigate the NPA worked out with Epstein by Acosta and other federal officials. Scarola said he believes the Epstein NPA should be set aside by the federal court.

Edwards and Scarola, whose law firm is now joining Edwards in its civil action in federal court designed to annul the NPA under the CVRA, said they intend to "hold Epstein and his co-conspirators fully responsible for their actions." In Epstein's apology, read in court by the billionaire's West Palm Beach attorney, Scott Link, Epstein wrote, "I made allegations against Bradley Edwards that were absolutely false."

Presiding Florida 15th Circuit Court judge Donald W. Hafele said from the bench that the Epstein-Edwards settlement "came swiftly." He said the statements by Scarola and Link were known previously to the court in order that prospective jurors could be dismissed from the jury selection process. Hafele struck a confusing note when he said that the jurors would have "sat through graphic testimony" from some of Epstein's victims for "some very painful experiences." However, Edwards stated that Hafele only permitted three of Epstein's victims to testify on behalf of Edwards in a "watered-down fashion." Hafele earlier instructed lawyers that he would not allow the trial to turn on Epstein's assaults on his dozens of victims. During his brief address to the court, Hafele admitted that before his elevation to the civil court and his being assigned the Epstein v. Edwards case in 2009, he was a juvenile court judge who handled some of the cases of Epstein's underage victims. Hafele said that, with the settlement of the civil case in his court, the federal CVRA lawsuit by Epstein's victims would proceed. Hafele cited The Miami Herald series in his remarks, iterating that those journalists who have written about it have "been fair" and he thanked the victim witnesses for be willing to step forward. Hafele also said that he "wishes Mr. Epstein well."

At a news conference following the hearing, Scarola pointed to a decade's worth of legal work against Epstein's "army of highly-paid superstars." These include Alan Dershowitz, Kenneth Starr, and Miami trial lawyer Roy Black. Scarola called Epstein's NPA a "get out of jail free card."

Although Edwards did not mention the #MeToo movement by name, he said he is now getting calls from victims of Epstein who are now willing to come forward. Edwards also slammed the Miami U.S. Attorney's Office and Acosta, saying they "were not interested in prosecuting Epstein but in protecting him." The current case pending in federal court invoking the CVRA will permit Epstein's victims to come forward without fear of cross-examination from Epstein's lawyers. The action is between Epstein's victims and the Department of Justice for trampling on their rights in hammering out the sweetheart NPA with Epstein. Epstein's legal team in not a party to the CVRA case. Edwards believes that Epstein's many victims should have the opportunity of facing Epstein in person and that Epstein should undergo the same experience that USA Gymnastics team doctor Larry Nassar had when he faced his victims in court.

Scarola said that in his entire legal career, which includes time as a prosecutor, he has "never seen a plea bargain where the defendant and named and unnamed co-conspirators received immunity for unnamed crimes." He added that there is "no precedence" for the type of NPA afforded to Epstein. WMR learned that additional Epstein victims are now coming forward with legal action in New York and New Mexico. In addition, Edwards said he and his team have spoken to other Epstein victims around the country and in the rest of the world." Scarola said that while Florida has a restrictive statute of limitations for victims to bring their cases to court, other jurisdictions "don't have that problem."

Related Topic(s): Agreements; Apology; Attorneys Lawyers; Jeffrey Epstein; Law; Litigation; Sex; Sex Scandals; Sexual Harassment; Women, Add Tags
Add to My Group(s)
Go To Commenting
The views expressed herein are the sole responsibility of the author and do not necessarily reflect those of this website or its editors.