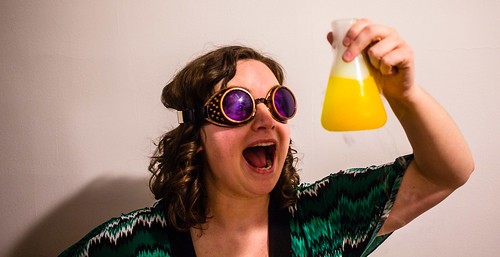 Science articles give the impression that the research is laid out in a logical order and that all the data fit neatly to confirm a hypothesis. All the false starts are left out by convention. All the embarrassing lab errors and the data that don't fit are

The truth is, scientists really don't know what we're doing. We're wallowing in the unknown, flailing, trying to keep our heads above the muck and trying to find some clear message from the morass.

Most scientists feel stupid most of the time. It comes with the territory. The exceptions are people who aren't really trying to do science, but are engaged in the vast enterprise of collecting the data on which modern science is built.

(This is summarized (with editorial freedom) from an article by Martin Schwartz in the Journal of Cell Science, The Importance of Being Stupid.)

One of the beautiful things about science is that it allows us to bumble along, getting it wrong time after time, and feel perfectly fine as long as we learn something each time"The more comfortable we become with being stupid, the deeper we will wade into the unknown and the more likely we are to make big discoveries.

Related Topic(s): STUPIDITY; Science, Add Tags
Add to My Group(s)
Go To Commenting
The views expressed herein are the sole responsibility of the author and do not necessarily reflect those of this website or its editors.