I know I've said this before, but I feel a need to formulate it anew, so I'm asking you to indulge me. It's about identical particles, Bosons and Fermions, and why the world seems solid when we kick it and how physics tells us that everything is really one thing.

Alice and Bob are both people, but you would never confuse them--they're not identical. "Identical twins" are a lot closer. Some people can't tell them apart, but their mother can, their spouses can. Imagine opening a box from the Acme Ball Bearing Company, picking out two stainless steel balls that look exacly alike. You really can't tell them apart. Maybe looking for pits and scratches with a microscope, or with a scale that weighs accurate to a microgram you might be able to distinguish them; but even if you couldn't tell them apart at all, you would always think it's a meaningful question to ask, 'is this ball number one or ball number two?'

We think of two electrons or two photons (light particles) with an extension of our common sense from larger objects. They have no nicks or scratches, and even the most sensitive measurement apparatus can't detect a difference in their mass or any other properties. But we think of them as distinct in principle. You, me, and the physics professor, we all think that this electron is the one over here, and that is the one over here. In fact, micro manipulation technology has allowed us to line up individual atoms in a pattern, and they stay put! 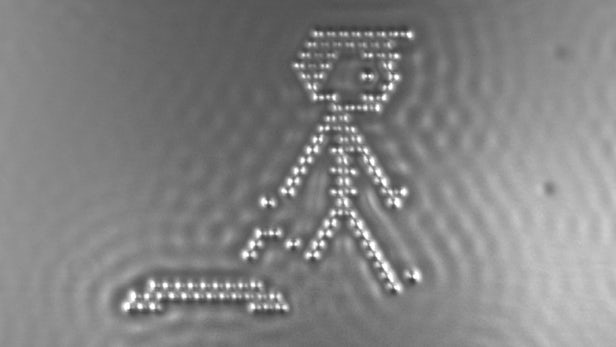 This picture is made of individual atoms (courtesy of IBM)

Light is made of photons, which are Bosons. The equation that governs the movement of a collection of photons, is explicitly symmetrized to account for the fact that the photons are identical in principle. What I mean by 'symmetrized' is that you write down the equation with photon #1 over here and photon #2 over there, then you write the same equation with photon #1 over there and photon #2 over there, you add up the equations and divide by two. So, what difference does it make to go through this Chinese fire drill, averaging up the two terms that are really no different from one another? Why bother? Yes it makes a difference, it makes a big difference. Technically, it's because the wave function for the photons is squared before you evaluate the intensity of the light, so that factor of 2 in the average doesn't come out in the wash. The probability is twice is high for two photons to be coupled together, moving in lockstep, acting like one big photon. And for a million photons, the probability is a million times as big. Once you get a large number of photons all moving in lockstep, the probabilty for the next photon to join them is very high. The upshot is that lasers are possible. Just a tiny crystal and an LED is enough to line up the photons, all moving in lockstep. (When I was in college, a laser cost $100,000, but now they're cheap enough that people buy them just to amuse their cats.) Lasers work because of the way that identical Bosons behave in quantum mechanics.

Electrons are Fermions, the opposite of Bosons in quantm lingo. Instead of adding up their wave functions and dividing by two, you subtract them and divide by two.

This minus sign is entirely responsible for the illusion of separateness which is so deeply embedded in our perception of the physical world. It's because for the special case where "here" and "there" are the same place, the two terms cancel out and the probability is zero. For two Bosons to be in the same place at the same time, the probabiliy is doubled; but for two Fermions, the probability is zero. Never happens. (This is called the Pauli exclusion principle.) And as the two Fermions get too close together, they start to sense this and they get antsy. They can only be brought very close together by giving them a great deal of energy.

When "here" and "there" are far apart, we imagine that particle #1 is over here and particle #2 is over there. Applying our experience from everyday life, we think of them as separate and distinct, but the QM equations are telling a different story. Both electrons are here, and simultaneously both electrons are there, and the two electrons are conspiring to keep a distance between "here" and "there" - not because they are different electrons, but precisely because their fates are locked perfectly together in this weird way, with the minus sign.

So, why is the rock hard when you kick it? Maybe you thought that the atoms in your shoe take up space and the atoms in the rock take up space and they can't be in the same space at the same time. That would be wrong. Or maybe you thought the electrons in your shoe have a negative charge and the electrons in the rock have a negative charge, and the two negatives strongly repel each other when they get close together. That's a very educated guess, but it's also wrong.

But there are more than two electrons in the world

How would you write the wave function for 3 or 4 or 1080 electrons? This part gets technical, but I'll write it down for those who find it fun.

Let's say there are 3 electrons and three different places. Call the places One, Two and Three, and call the electrons 1, 2, and 3. Then

Related Topic(s): Quantum Mechanics, Add Tags
Add to My Group(s)
Go To Commenting
The views expressed herein are the sole responsibility of the author and do not necessarily reflect those of this website or its editors.