"American voters expect Republicans -- who control all branches of government -- to figure this out and pass a spending deal that reflects American values." 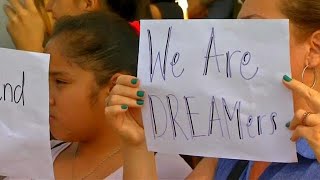 Progressives and immigrant rights groups denounced President Donald Trump and congressional Republicans after the Senate was not able to reach an agreement to fund the government by midnight on Friday, forcing the government to shut down exactly one year into Trump's presidency.

The shutdown became official after Senate Democrats rejected a bill passed by the House earlier in the week that would have funded the government through February 16.

Democrats refused to back the spending deal as it did not include protections for hundreds of thousands of young undocumented immigrants, known as Dreamers, under the Deferred Action for Childhood Arrivals (DACA) program as well as the Children's Health Insurance Program (CHIP), both of which have strong public support.

"There is no doubt that Donald Trump, congressional Republicans, and their racist agenda are fully responsible for this government shutdown," said Ilya Sheyman, executive director of MoveOn.org, which helped to organize a rally in support of DACA outside the Capitol Friday night as lawmakers struggled to reach an agreement inside. "It's on Republicans to...pass legislation to protect Dreamers -- who have been left in limbo since Trump ended the Deferred Action for Childhood Arrivals (DACA) program in September -- and reopen the government."

Senators could potentially reach a temporary spending agreement in weekend negotiations before government offices are scheduled to open on Monday, avoiding a full shutdown.

As of Saturday morning, more than 1,000 White House and congressional staffers had been placed on furlough, and non-essential agencies including those that process small business loans and passport services were expected to be closed starting Monday, barring a deal.

Senate Majority Leader Mitch McConnell (R-Ky.) hoped to get Democrats on board with a short-term spending deal that would keep the government funded through February 8, when he said the Senate would then vote on a bipartisan bill protecting Dreamers.

Although Republican leaders including McConnell blamed Democrats for the shutdown, most Americans surveyed this week echoed a sentiment shared by Trump in 2013, when he stated "I really think the pressure is on the president" to reach an agreement to keep the government running -- particularly considering the popularity of the programs the Republicans have held hostage.

"American voters expect Republicans -- who control all branches of government -- to figure this out and pass a spending deal that reflects American values, including the Dream Act, the Children's Health Insurance Program, and funding for disaster relief in Puerto Rico and elsewhere," said Sheyman.

As news spread of the failure to reach a deal, #TrumpShutdown became the top trending hashtag on Twitter worldwide early on Saturday.

commondreams.org is a progressive publisher
Related Topic(s): Daca; Government; Republican; Shutdown, Add Tags
Add to My Group(s)
Go To Commenting
The views expressed herein are the sole responsibility of the author and do not necessarily reflect those of this website or its editors.