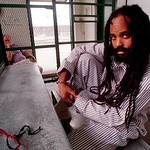 In a huge potential break in the long-running and controversial case of Philadelphia journalist Mumia Abu-Jamal, currently serving a life-without-parole term for murder in a prison at Mahanoy, PA, the Philadelphia District Attorney's Office says it has discovered six banker storage boxes of materials about the case in a locked storeroom of the DA's offices at 3 South Penn Square.

The boxes, spotted by Krasner himself during a search of the previously locked storeroom for an office desk, reportedly had the name "McCann" scrawled on their facing side, apparently meaning Edward McCann, the long-time head of the DA's homicide litigation unit (McCann left the DA's office in 2015). When the boxes were removed from under the desk, it was discovered that the name "Mumia" was written on the their hidden ends.

The newly located cardboard crates, which contain case files, evidentiary material and other materials relating to the Mumia case, are going to be provided to the defense for their inspection, according the DA's office.

The significance of this surprising discovery by Krasner, a prominent progressive defense attorney who won election as DA in November 2017 and moved into the DA's office last January, is that if those boxes contain any evidentiary material that was improperly withheld from the defense, and if what was withheld proved significant enough that it might potentially have led the original jury to a different conclusion for example a non-unanimous decision to convict it would be grounds for seeking a retrial of the case.

Even if such evidence were less obviously significant, it could open the door for the defense to seek a new Post Conviction Relief Act (PCRA) hearing at the level of the court of common pleas. At such a hearing both sides the defense and the DA's office would be able to make arguments and even, depending on the evidence found, to subpoena witnesses potentially even witnesses from the original trial who could be re-questioned under oath.

The discovery of the crates comes at a critical juncture for Abu-Jamal, who has spent 29 years on death row and a total of 38 years in prison after having his death penalty for conviction in the 1981 shooting death of white Philadelphia police officer Daniel Faulkner vacated on Constitutional grounds.

Just two weeks ago, Common Pleas Judge Leon Tucker issued an order ruling that four important PCRA appeals by Abu-Jamal, including his first lengthy and contentious PCRA hearing in 1995 at which all of the important evidence in the prosecution's case was challenged before the original trial Judge Albert Sabo, needed to be re-appealed to the Pennsylvania Supreme Court"...

For the rest of this article by DAVE LINDORFF, author of 'Killing Time: An investigation into the death-penalty case of Mumia Abu-Jamal' (Common Courage Press, 2003) and a member of ThisCantBeHappening!, the uncompromised, collectively run, six-time Project Censored Award-winning online alternative news site, please go to: https://thiscantbehappening.net/a-potentially-tectonic-event-shakes-up-the-mumia-abu-jamal-case/

Related Topic(s): Chief Justice Castille; Criminal Justice; Criminal Justice; Injustice; Justice Denied; People Mumia Abu Jamal, Add Tags
Add to My Group(s)
Go To Commenting
The views expressed herein are the sole responsibility of the author and do not necessarily reflect those of this website or its editors.