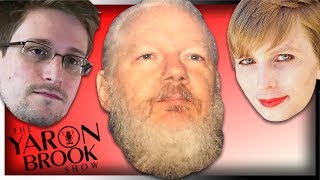 In a 22 May 2019 appearance in the White House Rose Garden, President Donald Trump declared that "I don't do cover-ups." Various news outlets immediately started to enumerate a long list of bona fide cover-ups associated with the president. What can one say about this bit of Trumpian nonsense? Can you accuse a person of lying who actually seems not to know the difference between truth and untruth? Trump's inability in this regard is demonstrated daily, and the Washington Postfact checker puts the running count of presidential lies at 10,111, with no end in sight. When it comes to reality, the president appears to be a malignant version of Walter Mitty.

Unfortunately, President Trump's behavior is but the tip of the iceberg when it comes to cover-ups. One can surmise that just by virtue of being the head of the U.S. government, the president -- any president -- must be directly or indirectly associated with hundreds of such evasions. That is because, it can be argued without much paranoia, that every major division of the government is hiding something -- particularly when it comes to foreign activities.

Of course, being cover-ups by the government may make them appear acceptable, at least to a naive public. Many of them are rationalized as necessary for the sake of national "security." And, of course, everyone wants to be "secure," accepting the notion that "... people sleep peaceably in their beds at night only because rough men stand ready to do violence on their behalf." The fact that much of this violence is done to other innocent people trying to get a peaceful night's rest is "classified" information. So woe be it to the truth tellers who defy these rationalizations and sound off. For they shall be cast out of our democratic heaven into one of the pits of hell that pass for a U.S. prison -- or, if they are fleet-footed, chased into exile.

Well, that sounds a bit melodramatic -- unless you happen to be Julian Assange, the publisher of WikiLeaks, or his notable informant Chelsea Manning or, taking one step back from the firing line, the Freedom of the Press Foundation.

The Trump administration is now seeking, via the "Justice" Department, to destroy Assange and Manning. Both are truth tellers or, if you want, whistle-blowers who, by revealing the truth about government behavior during the Iraq War, badly embarrassed Washington. The rush to punishment is being carried out with a maliciousness for which this president and his bureaucratic minions seem temperamentally well-suited. Always keep in mind that there are plenty of unethical professionals, in this case operating in the guise of government lawyers, available to serve the disreputable purposes of disreputable bosses.

Julian Assange has been charged with an 18-count indictment alleging that he "unlawfully obtained and disclosed classified documents related to national defense." It goes on to allege that Assange accomplished this when he "conspired with Manning and aided and abetted her in obtaining classified information " to be used to the injury of the United States or to the advantage of a foreign nation." Manning's sentence for these "offenses" was subsequently commuted by President Obama, but she is now in jail for refusing to testify before a grand jury investigating Assange.

The attack on Assange and Manning has brought into question the viability of the First Amendment of the U.S. Constitution and the notion of a free press -- seminally important matters. Here is how the Freedom of the Press Foundation describes the implications of the indictment against Julian Assange:

"Put simply, these unprecedented charges against Julian Assange and WikiLeaks are the most significant and terrifying threat to the First Amendment in the 21st century. The Trump administration is moving to explicitly criminalize national security journalism, and if this prosecution proceeds, dozens of reporters at the New York Times, Washington Post and elsewhere would also be in danger. The ability of the press to publish facts the government would prefer remain secret is both critical to an informed public and a fundamental right. ... Anyone who cares about press freedom should immediately and wholeheartedly condemn these charges."

Given these circumstances, one might be surprised, and very disappointed as well, to know that a concerted opposition to this threat from the so-called Fourth Estate (the press and news media) has yet to materialize.

The truth is that, beyond fact-checking the statements of a pathological president, too few journalists are willing to go out on a limb on the issue of a "free press," or, if you will, for the integrity of their own profession. As it is, most of the American mass media more or less toes a government line and has done so for a very long time. They do this because their owners and editors are either in agreement with the government, see it as economically necessary to appear as traditionally loyal Americans to their readership, or have selectively hired reporters and other staff who are too passive to resist government pressure. Thus, episodes such as the 1972 reporting about the Nixon-inspired break-in at the Watergate and the revelation of the Pentagon Papers in 1971, along with the occasional local investigative expose, are exceptions rather than the rule of journalistic behavior. At best, if a newspaper or TV station wants to appear politically risque' they will confine the effort to a supposed "balanced" editorial page or segment.

If the journalistic establishment appears hesitant, civil liberties organizations such as the ACLU readily agree with the Freedom of the Press Foundation. The ACLU Director, Ben Wisner, notes that "For the first time in the history of our country, the government has brought criminal charges against a publisher for the publication of truthful information." The key words here are "publisher" and "truthful information." Wisner goes on to say that "It establishes a dangerous precedent that can be used to target all news organizations that hold the government accountable by publishing its secrets." In other words, Trump and his minions are taking a step in the direction of dictatorial censorship.

Related Topic(s): Assange; Cover-ups; Journalism; Manning; Truth; Truth-teller; Wikileaks, Add Tags
Add to My Group(s)
Go To Commenting
The views expressed herein are the sole responsibility of the author and do not necessarily reflect those of this website or its editors.