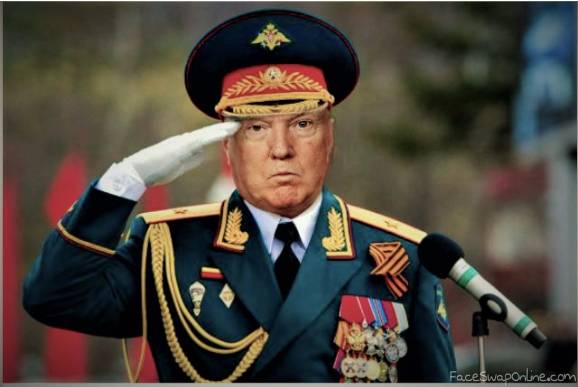 In the long and storied history of the United States in moments of crisis the has President always stepped into the gap to reassure the American people. Well, most of the time. Donald Trump and the whole staff of Romper Room held a news conference the other day to reassure the American public and Wall Street that a cool hand was at the throttle in this moment of financial crisis. "We have these great plans! We're going to do stuff! You're gonna love it. Plans"big, big plans!"

Four Score and seven years ago our for fathers, had great plans They we're gonna do stuff. The only thing we have to fear is no plans or great stuff! The markets were so heartened to see this act of Presidential leadership the futures markets tanked to the maximum and were shut off.

Then yesterday the whole gang got dressed up and put their ties on for the big reveal. We were going to hear about the big, big plans but the President was a no show. Under normal conditions the President not showing up for a meeting could be considered a good thing. But"since he said, just you wait and see we got big, big plans it was a little surprising not to see his orange smiling face.

The markets bounced back which under normal conditions would be a good thing. But this was more like a ricochet, the markets were looking for guidance and got; Please excuse Donald from the meeting today his bone spurs were acting up.

The markets began to slide again on the information that there wasn't a cool hand on the throttle and the President was a no show. Realistically no one expects miracles from the administration. They've discussed payroll tax cuts and tinkering around the edges but doing stuff conflicts with the policy of See No Evil, Hear No Evil and speak only to Fox News. Those alternative facts are interfering with reality again.

Related Topic(s): Conflict; Crisis; Fear; Markets; President; Reality; Trump, Add Tags
Add to My Group(s)
Go To Commenting
The views expressed herein are the sole responsibility of the author and do not necessarily reflect those of this website or its editors.