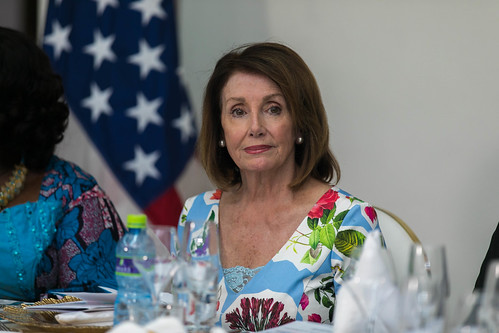 A lot of pundit verbiage and Democratic Party internal debate as well is being wasted on the question of whether Trump could be convicted successfully in a Senate currently run by a lickspittle Republican majority afraid of their shadows and devoid of any concern for the fate of Constitutional government.

Let's accept that the 20-plus Republicans among this bunch of gutless partisans that would have to join all or most of the 47 Democrats and independents in the Senate in order to convict Trump do not exist, even if they were to be shown a video of Trump plotting a military coup.

It would still be the duty of the House Judiciary, and of the Democratic majority of the House of Representatives, to fully investigate President Donald Trump's impeachable "high crimes and misdemeanors," his ongoing violation of the Constitution's emolument clause against profiteering from his high office, and his use of bribery/extortion on the president of the Ukraine in hopes of getting foreign support for his 2020 campaign for re-election, and to vote out of the Judiciary Committee and to approve in the House articles of impeachment for those constitutional crimes.

Why go through such an exercise in futility if there's little or no hope of a Senate conviction?

Because the Congress is the only available government body that has the power to stop a power-crazed president from becoming a dictator.

And because even if Trump were to be prevented by other forces whether the courts, the Congress, an assassin's bullet or too many Big Macs and milkshakes from wreaking further havoc on the American body politic, its society and its people, allowing him to carry on as a dictator, issuing power-grabbing executive orders, violating laws passed by the Congress, refusing subpoenas of his taxes or his subordinates, etc., not to mention launching military actions without any legal backing, his impeachment will establish a new baseline of acceptable/unacceptable presidential behavior and power for all future presidents.

Fine words from the Democratic representative from San Francisco, to be sure.

But where was Madam Speaker back in 2002-3? That's when President George W. Bush and his consigliere Vice President Dick Cheney, with the support of Secretary of State Colin Powell and National Security Advisor Condoleezza Rice, lied brazenly and repeatedly on the basis of fraudulent evidence, claiming that Iraqi dictator Saddam Hussein had a nuclear weapons program that was about to give him the ability to nuke US forces and the United States itself, as well as a poison gas and germ warfare capability that also imminently threatened America? It was widely known by anyone paying attention at the time that the portrayal of Iraq as an imminent threat to the US was a sham. Even as the US was building up for an invasion, inspectors on the ground, including American ones, were crying out that there were no such programs. Iraq had no navy, no long-range missiles capable of delivering the non-existent nuclear warheads, or even germ or chemical weapons. Even the white powder that Secretary of State Powell ominously held up in a little jar in the UN Security Council, claiming it was deadly "militarized" anthrax spores, was nothing but a cheap stage prop.

Also a fraud was the claim that Iraq had tried to arrange for the transport of "yellow cake" uranium ore from Niger to Iraq, purportedly for use in creating U-uranium for a nuclear weapon. Aside from the major problem that Iraq had no equipment to do the complex, costly and time-consuming work of isolating out the critical bomb-making isotope U-235 that is just 0.72% uranium ore from the U-238 that constitutes 99% of it, the evidence that this transaction was even attempted consisted of a letter typed on forged stationary stolen in a CIA black bag-job on Niger's unguarded Embassy in Rome, and "signed" by a Niger official who was not longer even in office, as I wrote in my and co-author Center for Constitutional Rights Legal Director Barbara Olshansky's book The Case for Impeachment (St. Martin's Press, 2006).

The entire Iraq War was a war crime launched on a blatant lie!

If ever there was a president (and vice president, secretary of state and national security advisor!) who deserved to be impeached, convicted and packed off to do hard time in a jail cell in Leavenworth, it was GW Bush. But right about the time my book rolled off the presses in May 2006, this same Pelosi declared that as long as she was speaker, "Impeachment is off the table."

To the dismay of then House Judiciary Chair John Conyers, Speaker Pelosi was as good (or bad) as her word and his committee was not allowed to conduct impeachment hearings or to call witnesses and investigate this and other high crimes and misdemeanors of the Bush/Cheney administration.

Think about that. The biggest crime of the past half century the launching of a major war by the US in violation both of International law and of even the US Constitution, which grants war-making powers solely to Congress a war that caused thousands of US military deaths and injuries, hundreds of thousands and perhaps over a million Iraqi deaths, mostly of civilians, that cost trillions of dollars and that destabilized the entire Middle East for decades, was based entirely on a presidential lie, and Pelosi would not allow an impeachment hearing!

Related Topic(s): House Speaker Nancy Pelosi; Impeach Trump; President George Bush, Add Tags
Add to My Group(s)
Go To Commenting
The views expressed herein are the sole responsibility of the author and do not necessarily reflect those of this website or its editors.