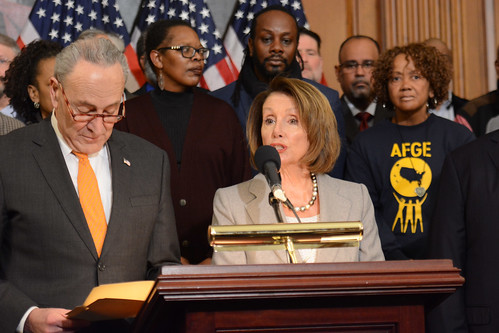 The Republican and Democratic Parties have been evaluated in many ways but not often by the standard of sheer energy levels. Compare the ferocious drive by Trump, Republican Senators and Representatives, Attorneys General, and Governors in promoting, with baseless allegations and buckets of lies, overturning the presidential election. Of the more than 50 election lawsuits filed by Trump's Republican allies, almost all of them have been promptly thrown out of court.

The wildly frivolous efforts by Trump and his cronies have provoked a rare public letter, signed by over 1,500 lawyers, including past presidents of bar associations, urging disciplinary proceedings against the lawyers representing craven Republican operatives in their attempted electoral coup. (See: lawyersdefendingdemocracy.org)

Now let's go back to the George Bush/Al Gore presidential election in 2000, where there were real shenanigans. It all came down to Florida's electoral votes, notwithstanding Al Gore winning the national popular vote by about 500,000. Thousands of people were prevented from voting because they had names similar to the names of ex-felons who were purged from the voting rolls.

Ari Berman's Nation magazine article, "How the 2000 Election in Florida Led to a New Wave of Voter Disenfranchisement" reports: "If 12,000 voters were wrongly purged from the rolls, and 44 percent of them were African-American, and 90 percent of African-Americans voted for Gore, that meant 4,752 black Gore voters -- almost nine times Bush's margin of victory -- could have been prevented from voting." According to Florida's Sun-Sentinel newspaper, "The felon lists were compiled by Database Technologies Inc., now part of ChoicePoint Inc., an Atlanta-based company. In 1998, DBT won a $4 million contract from the Florida secretary of state's office to cross-check the 8.6 million names registered to vote in the state with law enforcement and other records." Republican presidential candidate George W. Bush's brother Jeb Bush was Florida's governor during this horrendous disenfranchisement.

There were also deceptively confusing ballot designs in three Florida counties that tricked voters into voting for the wrong candidates.

And there was the judicial coup d'e'tat stay by the U.S. Supreme Court, led by Republican Justice Antonin Scalia, that blocked the ongoing statewide recount ordered by Supreme Court of Florida which would have awarded the state and the election to Al Gore.

The 2004 presidential contest, between George Bush and John Kerry, came down to the swing state of Ohio. By 118,601 thousand votes, the Republican Secretary of State awarded the state to Bush/Cheney. There were, in the days before the election, claims of Republican skullduggery, including voting place irregularities, obstructions of voters, and flaws in proprietary software used in the vote-counting process. Kerry's vice-presidential running mate, Senator John Edwards begged Kerry not to immediately concede and to wait for more revelations. But Kerry threw in the towel the day after the election.

Civic leaders in Ohio took their concerns about electoral wrongdoings to the veteran lawmaker, Rep. John Conyers (D-MI) who held public, unofficial House hearings on the subject. It was too late to change anything, but the hearings did cast a shadow over the GOP which the establishment Democrats quickly forgot about.

In 2009, the Fox Television-driven launch of the Tea Party movement, having more than 350,000 engaged volunteers, roiled the back-home town meetings of Republican members of Congress and secured a clenched-teeth grip on the House of Representatives with some three dozen true believers. This small cohort, self-named the Freedom Caucus, had an outsized veto over Rep. Speaker John Boehner and eventually drove him to resign.

The 70 or 80 Progressive Caucus members in the House have scarcely generated a ripple with their demands on the House Democratic Leadership of Speaker Nancy Pelosi. Energetic, demanding Democratic resisters in the House hardly exist, whether on overdue anti-corporate crime legislation, labor law reform to remove barriers to organizing trade unions, fundamental corporate tax reform, corporate-managed "free trade," or runaway militarism.

Related Topic(s): Democratic; Issues; Republican; Republican GOP Dirty Tricks; Republican Sabotage; Republican Threats, Add Tags
Add to My Group(s)
Go To Commenting
The views expressed herein are the sole responsibility of the author and do not necessarily reflect those of this website or its editors.