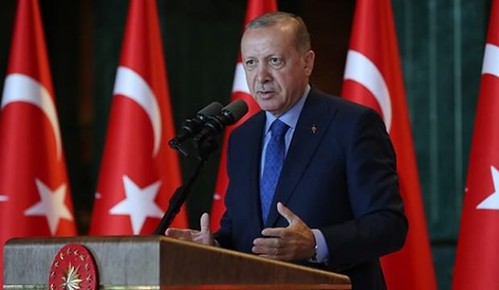 On February 18, 2020 top mass media outlets and officials, including the head of the UN support mission in Libya, Ghassan Salame, confirmed that the Libyan National Army (LNA) shelling of Tripoli's seaport. The Field Marshal Khalifa Haftar attacked a Turkish vessel allegedly transporting arms and military equipment for the UN-backed Government of National Accord (GNA).

It was the first direct confrontation between Khalifa and Turkey. Ankara did not expect that Haftar would directly attack Turkish forces. When Erdogan sent military aid to support the GNA, headed by prime minister Fayez al Sarraj, he thought it would be a "cake walk". But as usual everything went wrong, and the risky military operation immediately turned into carnage from the beginning.

The GNA claims that the latest LNA attack inflicted significant damage to the military equipment supplied for the GNA and also killed six high-ranking Turkish officers. One of them was a colonel of the Turkish military intelligence named Col. Okan Altınay. Okan supervised arms delivery for the Tripoli-based GNA. Also reportedly Libyan Brig. Gen. Khalil Soysal, known as "Black Claw", his personal assistant, and General Staff Colonel Kemal were wounded.

Erdogan is trying to hide the real death toll of the Turkish military personnel in Libya. It is especially obvious by comparison with the glorification of the Turkish soldiers who have died during military operations in Syria.

Ankara insists that Turkey is not participating in military operations in Libya, and that they are carrying out only the functions of instructors and advisers. At the same time ignoring the losses demonstrates that the battle capacity of the Turkish army is extremely overrated. Erdogan is doing his best to project an image of "the great Ottoman warlord", which he has been trying to create for a long time.

The petty tyranny of the Turkish leader is costing a lot to Turkey. Erdogan is attempting to implement his imperial intentions and please his Libyan Islamists friends. By doing so, Erdogan is endangering the national Armed Forces by turning a blind eye to its losses. It remains a matter of time before the Turkish military reminds Erdogan of his neglectful attitude. But when it does, it will remind him of his former tricks, and it will take revenge on a would-be sultan.

Independent journalist covering Libyan conflict
Related Topic(s): Army; Libya Revolution; Libyan Government; Libyan Revoluionary Underground; Military, Add Tags
Add to My Group(s)
Go To Commenting
The views expressed herein are the sole responsibility of the author and do not necessarily reflect those of this website or its editors.

Civil War and Chaos in Libya Rages On

Libyan Political Dialogue Forum in Tunisia: a triumph of the Muslim Brotherhood?