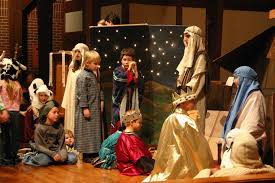 Grandchildren are wonderful, and so are Christmas pageants.

Last Sunday, just minutes before the curtain went up on our church's annual play, one of the shepherds (my seven-year-old grandson Orlando) approached me with an urgent question seemingly from out of the blue. "What's the evidence (he used that word) that Jesus ever lived? How do we know," he asked, "that he existed at all? Huh? Huh? Where's the evidence?"

Caught off guard, I replied, "Well, that's complicated. I suppose we have as much evidence as for any figures from the ancient past. How do we know, for instance, that Julius Caesar ever existed?"

With that, Orlando ran off to tend the sheep.

But of course, my answer except for the first part about complications was completely inadequate. It revealed how we elders have dodged sharp questions from our children and grandchildren long enough. We've not been honest with them in answering burning queries concerning the very meaning of life and the nature of the sources we claim to be inspired. As a result, we've driven them away into a world that is consequently (as Caitlin Johnstone has so delicately put it) completely F**ked. That is, we've filled their minds with fictions that pretend to explain the world but that won't finally hold water.

Let's face it: we don't have nearly the evidence for Jesus' existence that we have for Caesar's. And there's good reason for that hard reality -- reason that cuts to the very heart of so many questions about figures from yesteryear and even about our contemporaries. It's why we need "people's histories" like Howard Zinn's.

Fact is, we never know much about poor people from any historical period (including our own). And Jesus left no direct record. He wrote nothing. Possibly he was illiterate.

Moreover, the record-keepers of Jesus time (and the Romans were exquisite about records -- that and building roads and killing people) just weren't interested in the nobodies they ruled, especially in marginal provinces like Israel and especially from towns like Nazareth, a true nowheresville.

Yes, the Romans kept records about their puppet kings and temple collaborators. But even those flunkies weren't interested in the others, much less about the innumerable insurgents they routinely offered for execution with the special process Rome reserved for terrorists crucifixion.

Despite the impression we get from the Christian Gospels (which were written long after the fact) the whole world wasn't watching Jesus' trial and execution, much less his birth. No, there probably wasn't any trial at all. And Jesus' body was likely thrown into a common grave after it was consumed by buzzards and dogs.

So, actually, my response to Orlando's question (if he were capable of understanding it) should have been: "If you're asking about the birth of Jesus and the story you're about to perform on stage . . . No, we don't have any evidence that it happened in the way you'll portray it.

"In fact, the story you're enacting probably didn't take place at all. Most likely, there were no angels or shepherds, magi or guiding star.

"I say that because only Luke and Matthew tell stories like that. They're not found in Mark (the earliest of the Gospels) nor in John, the last one of the four. This means that Mark and John either didn't know of what scholars call "the infancy narratives" (including the virgin birth) or they didn't think the tales important enough to include. And if the Christmas stories actually occurred, neither of those possibilities is very likely.

"You see, the infancy narratives are what scholars call Midrashim or Aggadah interpretative parables based on ancient Jewish texts like Isaiah 7:14, which reads: 'a virgin (actually a young girl) shall conceive, and bear a son, and shall call his name Immanuel." The stories are invented to make a theological point in this case, that from the beginning Jesus embodied a special manifestation of Israel's God, Yahweh."

Personally, I remember when I was first introduced to Midrashim and Aggadah when I was much older than my seven-year-old grandson. That was something like 55 years ago, when at about 24 years of age, I was beginning my seminary study of ancient biblical texts. I still remember my shock at learning that the story of the Wisemen was Midrashic fiction. What? No magi? No star? No gold, frankincense and myrrh? My mind quickly raced ahead. What then about Jesus' resurrection? Could that be Midrash too? I was deeply threatened and devastated.

Related Topic(s): Children; Christmas; Fiction; God; History; Jesus; Resurrection; Story; Truth, Add Tags
Add to My Group(s)
Go To Commenting
The views expressed herein are the sole responsibility of the author and do not necessarily reflect those of this website or its editors.